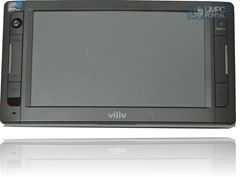 I’m testing a Viliv X70 EX right now. It’s an impressive ultra mobile PC with a ‘traditional’ slate form factor designed around a 7 inch screen but with so many improvements over the 2006 Origami devices, you’d hardly believe it was in the same product category. Remember how we wanted SSD, 1024×600, SD card slot, GPS, Webcam, 5hr+ battery life, HD video decoding and a quality design? Well you’ve got it right here with the X70 EX. I’m testing the Premium Air model which has the 32GB SSD (it’s fast!) and a built in 3G modem.

NEW! Viliv X70 EX product page. Check it out for specifications and links to related articles from other websites.

The only things missing were the price and availability details. Dynamism, look like they will be first out of the gate with pricing as the 3 different models have just gone up on their website.  They don’t have prices but I’ve already heard that the entry level SRP will be $599 which makes the whole line-up very interesting indeed. As for availability, the details are not available yet but Viliv tells us that they have already planned a launch event. Update: Dynamism have listed a starting price of $599.

Viliv are aiming for the PMP, PND, VOIP, Video call, and general computing use scenarios with this. The 7 inch screen is big enough to use comfortable on a table with an external keyboard. Full details on how the Z515 CPU operates aren’t available yet but we’re assuming that the device will run at 1.2Ghz unless there is a heat build-up. In which case it will drop to 800Mhz. I would need to test this out to get the full picture but I’m assuming that you’ll be OK to run it in 1.2Ghz all the time. Considering that the 1.3Ghz version I have is stepping down to 800Mhz most of the time anyway, I doubt you’ll notice the difference. (I repeat though, full details aren’t available yet.)

Head over to Dynamism to register for more details.

Here are some images of the Premium Air with the optional leather case. You’ll find a video below.

Check out a number of videos in the Viliv Mania channel on YouTube. One of them, a great demo of itunes, is embedded below.

We’ve got the X70 EX Premium AIR here and I’m putting together a first impressions video and post that will go up very soon.  JKK and I are also planning a live session this week as soon as he’s back from  Computex.