What Moorestown means for Consumers

I wake up this morning to a clearer understanding about where Moorestown fits but to an article that highlights that there’s a lot of marketing to be done by Intel. The new platform, demonstrated yesterday on a number of working devices, appears to be technically very capable and extends through a number of product sectors. It brings new levels of processing power and leads in making the Internet in your pocket more ‘real’ than with any other platform I’ve researched and yet there’s a surprising lack of interest. In fact, over the last 24 hours, there has been more interest in Intel’s deal with Wind River than with their move into the smartphone market. What happened?

E3, smartbooks, booth babes, an Apple conference, Palm Pre reviews and a lot of other news have a lot to do with it so perhaps the timing wasn’t exactly perfect. Perhaps Intel could have helped too. They’re calling it a MID platform and up to now, there really hasn’t been much penetration for the term and certainly no big-number consumer hit so attention levels could have been low when Intel mentioned that the platform is voice-call capable. They also failed to mention that the platform is 720p recording capable and that it could be used to make some amazing Moblin-based smartbooks. Intel is confident that they would be better than the ARM based ones too!

Maybe I can help, just a little, by trying to simplify the key points. What does Moorestown mean for consumers?

Moorestown is a computing platform, based on a more efficient version of the Atom CPU and big changes in the way that the other components in a traditional ‘computer’ are built. There will be versions that will run Windows XP or Windows 7 or other desktop platforms but that’s not really what Moorestown is intended for. Intel have built their own software to go on top of it and its a snug fit. It controls the ‘computer’ in a way that means it can continue working in a state where it’s effectively sleeping with one eye open and that opens up a whole new world of possibilities. Here’s some examples: 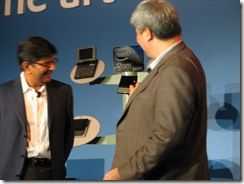 Expect Moorestown-based devices to be as small as a smartphone and to be able to run, on a smartphone sized battery, for over 24 hours. Intel are telling us that devices will idle with 50x less power drain than today’s Intel Mobile Internet Devices. The worst MID I ever tested ticked-over for about 1 hour on the juice of a smartphone-sized battery. Intel says that this will increase to 50 hours. The best-case scenario, based on testing I’ve done on the current best-of-Intel is 3-times that figure. 3-days active standby.

Moorestown scales. It sleeps with one eye open but when it wakes up it’s capable of Internet browsing speeds, accuracy and richness that you will have never seen on an ARM-based device. I’m expecting high-end versions of Moorestown to bring sub 10-second average page loads to every web page on the Internet. The current best smartphones take twice as long as that and the next-gen may only shave 50% off that.

I really wish Intel had highlighted HD video  recording as it’s an important benchmark figure these days. Smartphone manufacturers are building these facilities into their devices and HD video is a huge growth area on the Internet. Moorestown enables 720p video recording. Not only that but the software layer has been designed with that in mind too. GPS-enabled applications with social-networking capabilities are baked into the software making it easy to make compelling mobile applications.

Moblin, the name of the software that runs on Moorestown, is a standard-compliant software stack too so there’s a huge library of free software out there. Moblin has the potential to offer a very rich choice of software, for free and because it scales and can be connected to the internet all day, introduces new revenue generating models.

For me, those are the key features of Moorestown but it clearly brings advantages for existing MID, PMP, Navigation, and ultra mobile PC market segments too. Think about it â€“ you won’t have to turn Intel’s mobile devices off any more. That alone, is a huge change for a mobile ‘computer.’

Intel still has a journey ahead and there’s some good competition out there but I, for one, will be looking forward to putting the Moorestown Internet experience in my pocket