As time goes on, more and more of my time is being taken up reading very interesting smartphone news. WVGA, Android, WM6.5 and Cortex are the important keywords and every time a device comes up it becomes clearer that the push towards the MID market is greater from the Smartphone manufacturers than it is from the Intel-based MID and ultra mobile PC market. With Menlow in a strange UMPC-like state (with no Moblin support now) there’s a long wait until consumer-focused MIDs come out on the Moorestown platform in 2010. It’s even clearer than before that ARM will have the upper hand in the MID space in 2009 by building up from existing products and brands that already sell millions of devices. Intel will have to sit back and wait for the time being.

Today has been particularly active in the ‘MIDPhone’ space.

As I was updating myself on the status of my Samsung Omnia order (no delivery date in sight) I took a quick look at other options that are available and the Toshiba TG01 (soon available in the U.S.) jumped up at me. With a screen size of 4.1 inch, a resolution of 800×480 and  processing power that is 2-4 times as much as the Nokia N800 / N810, it’s difficult to ignore. Pricing is now under 500 Euro for an unlocked version and 02 in Germany are selling it for 150 Euro with a 25 Euro / month contract. Add 15 Euro on top for Internet and you’ve got an interesting option that you I could walk out and buy tomorrow. Chris over at SlashGear has just finished his review and although he wasn’t impressed with the UI and predicts that the WM operating system could be an issue, I still think that the device represents great value for mobile internet fans. When Windows Mobile 6.5 comes along it could make it even more interesting, especially if Opera 9.7 works on it. I’m looking forward to seeing some browsing speed tests on this one. Note: No keyboard!

As I was finishing up reading Chris’ article a news item about an HTC Leo popped up. The Ai.rs blog has posted what they say are the specifications for this new HTC device. I don’t know who Ai.rs are but everyone seems to be following up the story. WMPowerUser (a blog I frequent more and more these days) says that the device is the HTC Firestone. All I know is that it’s rumored to have a 4.3 inch screen and run a Snapdragon platform at 1Ghz. This is definitely another one to add to the MID list. Again, it looks like there’s no keyboard. 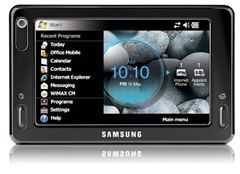 Only a few minutes later I read the news that the Samsung Mondi is launching. The Mondi is an even bigger device with a slider form factor and a 4.3 inch screen. Samsung are dropping a WiMax module inside and handing it over to Clearwire for a launch in Las Vegas. It’s an ARM11-powered device running Windows Mobile again. No pricing, No availability details. Style and feature-wise it’s not too exciting and in fact it doesn’t even support voice so this is really focused at mobile internet activities.

The Mondi’s compact design provides the user with a more mobile form factor and ease-of-use than the typical laptop or netbook. While it is small enough to fit into the user’s hand or pocket, the Mondi packs an impressive Web browser, powered by Opera 9.5, which takes full advantage of the device’s 4.3-inch touch screen.

I’d like to see this with HSPA, Android, a high-end CPU and a big fat battery for all-day mobile internet use!

Finally, in addition to all that, there’s news about a Sony Xperia X3 which had previously been known at ‘Rachael.’ Dutch blog ‘All About Phones’ found the information in an Expansys we page and it’s quite the interesting read, largely because it’s going to be running Android and will have a 4 inch 800×480 screen. As yet, the CPU information is unknown. If you’re thinking about an HTC Hero, you might want to wait for final specs and pricing on this one.

None of these devices represent the ultimate MID yet but you can see where things are going. The 4 inch to 5 inch space is getting very busy already. I’ll beadding some of these (if not all!) to the database very soon.