As the Viliv S7 makes its way towards us here in Germany (as I write, it’s somewhere between Seoul and Cologne expected Monday or Tuesday) it’s clear that other’s are ramping up for the big launch too.

Jenn downloaded some of the new press images [full set of 47 images here] and she’ll also be getting one next week. Dynamism have put the device up for pre-order too. Pricing is better than I thought with the mid-range 32GB SSD version up for just $659. I was honestly expecting (and worried about) pricing nearer 800 dollars. Of course it’s more than a netbook but don’t get me started on that one. I’ve a list as long as my arm detailing differences between a netbook and this UMPC. 800gm and 8 hrs of battery life is the best figure. 1hr per 100gm makes it extremely strong in battery life/weight ratio. 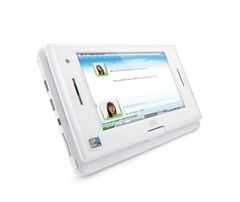 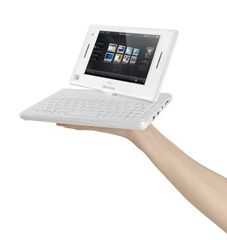 There are three versions of the S7 available at Dynamism

The entry level S7/60 with a 60GB hard drive and the 1.3Ghz Atom CPU with 1GB RAM and XP Home. A good combination for those that want to use the S7 mainly as a media player. $629

MID-Range 32GB SSD version. This is the version to go for if you want silent operation, a little more speed with boot-up and application access and the ruggedness that comes with having a PC with no moving parts. $659.

The high-end SSD/3G version obviously adds the HSPA (high speed up/down) modem which we understand is a voice-capable Huawei model as found on the X70 and S5. $799

For more information and to register for availability and special offers, see Dynamism.com

A few things to think about:

Despite the great features it has to be said that if you’ve got a netbook, the S7 may be difficult to justify but if you don’t have a netbook and want a ultra mobile PC to cover table-top, mobile, handheld, car and other duties, the S7 is a real multi-scenario mobile computing gem.

Live session with the S7.

The S7 is due to arrive on Monday or Tuesday here and JKK and I have planned a live session for Tuesday evening after the Archos press event. Stay tuned for more information.