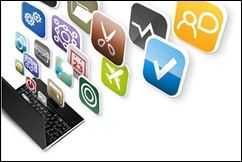 There’s a huge amount of information to digest around the announcement of the Intel Atom Development Program, or app-store but at a special lunch meeting with some of the key people in the IADP team I managed to refine what I think is going on here.

In summary you’re looking at Intel setting up a distribution, billing and  validation process for applications that are built to run on Windows and Moblin-based netbooks. Intel expect most of the (currently 19) Moblin distributors to build this into their Moblin-based distributions and on Windows, the system will be available as a downloadable application. It’s early stages for the program but I’m hearing that work on the back-end is well progressed and making an estimate that we’ll see this being fed into Moblin-based netbooks in the first half of 2010.

Key features of the program:

Clearly this is a significant step forward for Moblin but also a significant step forward for distribution of Windows applications for netbooks. Intel are saying that the program is not there to generate revenue directly but to enhance the platform and make it more attractive for end users and developers. (Increased product sales.) The revenue split is likely to be 70/30 with the 30% going towards financing the validation process back-end systems and further development.

With tens of millions of Netbooks already out there and tens of millions coming, this is clearly something that developers need to take a closer look at. Moblin is not just for netbooks and as the platform support widens, I would expect this to be available for devices based on the Moorestown platform later in 2010. With one CPU and software architecture running across all of those platforms, from smartphones to laptops, there is a lot of potential for this to rise high on the list of platforms that developers consider when they write mobile and web-focused software.