Is it the most powerful, advanced and open smartphone on the market or is it just a geek toy? Is it the best in convergence or does it cut corners and try to be too many things at once? Is it a device for you, the ultra mobile computing enthusiast? 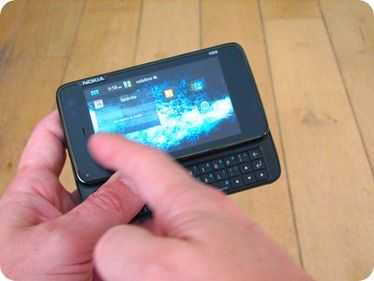 As the Meamo summit continues this weekend it’s becoming clear that the N900 is part of a research and marketing program that is carefully targeting itself towards a landing-point for the next generation of high-end Nokia phones, operating system, applications and services. The N900 is not really targeted at the consumer and in terms of software, is a long way from being complete. The hardware contained inside is leading-edge and expensive and won’t allow Nokia to compete at the right price level either. Nokia freely admit that software isn’t complete too. An application is needed for the FM radio and consumer infra red ports, there’s no system-wide portrait-mode support and that it needs apps. Lots of them.

The N900 is a technology showcase designed to stimulate a wide range of development activity that can be used to refine the products that will appear with the next, final, phase of Maemo. The real consumer-focused products.

It’s a brave plan that requires considerable investment by Nokia. It risks damaging the N-series brand and even the reputation of Maemo. The feedback and statistics may be from the wrong demographic and being an open project it allows others to watch and learn too.

Nokia appears to believe in this open concept though and by bringing such an advanced device to the market are offering developers a huge opportunity to get involved at a very early stage with the platform that could be driving a large percentage of the next-generation of converged pocketable devices.

Nokia understands what is happening to the market and how apps and services are quickly changing the economics. It needs to create products that are point-of-sale devices for Ovi and carrier services and by carefully monitoring what’s hot and what’s not in the Maemo and N900 program Nokia can refine the way Ovi is developed and marketed. Will users be asking for live user-user chat on the Ovi Maps application or will they just be asking for Pizza? How many apps reach the N900 from the three available channels and which channels (free on-device, web-promoted or the controlled and monetised Ovi store) are more popular with certain user types? Will anyone even bother to write that FM radio application? What percentage of downloads are for ebook reading software? Is gaming popular? Is the phone used 24/7? etc. etc. All these statistics, and thousands more, will help to refine the product range, the user interface, the services and products offered by Nokia, the carriers and their partners and of course, Ovi.

The N900 is a catalyst and it just so happens that it’s good, is going to get better and is available to all of us who enjoy the ultra mobile computing experience. It’s another great option and as a converged, pocketable, voice-capable device, the best I’ve ever used. It’s a great catalyst!

Announcement: N900 LIVE videocast with JKK and myself is planned for Monday evening at about 2000hrs CEST (central europe.) We’ll be going over the N900 on video, demonstrating some features and answering questions in the accompanying chat channel. Join us at UMPCPortal.com/live on Monday. Check back to UMPCPortal for the final timings.