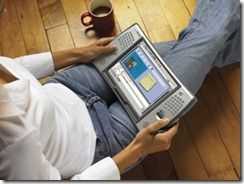 How does this sound?

It’s the specs of the original, 2005, Pepperpad and a hat-tip goes to Len Kawell who was way ahead of the game in this space. In this interview he’s talking about how the Pepperpad is tailored for web applications, home usage, kicking back and checking facebook with a tailored

user interface. ‘An alternative to a laptop for couch computing.’ It took four years until someone, Apple, came along to focus solely on the same market again.

Sofa, bed and car were usage scenarios I highlighted in my first weeks postings at Carrypad and from that, I chose the name Carrypad. (The first 5 or 6 posts on Carrypad were written weeks before I got round to setting up a blog.)

There’s the third device requirement popping out now â€“ Sofa, Bed, Car.
I tell you â€“ this is mini-tablet/micro laptop territory. The product group with no definition. We need a new definition here:

I’m so happy to see Apple moving into this space. It’s been too quiet for too long so lets hope that the OEMs and designers feel confidence from the iPad and lets hope that the market breaks out with new form factors, prices, operating systems and features. This is ‘personal’ computing space and the more designs we see here, the more customers will be happy.