The Dell Mini 5 Tablet with Android

The 5-inch tablet was shown today at CES 2010 in Dell’s suite at the Palm’s hotel in Las Vegas and given an official name.  The Dell Mini 5.  It will be part of the Dell Mini line of Netbook offerings included with the Dell Mini 3 and other Mini devices.  No launch date was given and very few technical specifications are known at this time, but the device will be available in several colors including Red, Black, and Pink.  It will also have a SIM slot for use outside wireless range.  According to Pocket-lint, the device was running Android 1.6, but it remains to be seen which version of the popular cell phone OS will be included when the device ships.  There are some great pictures over at Pocket-lint of the device at CES 2010, so head on over and check them out. 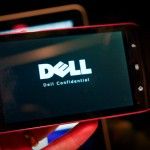