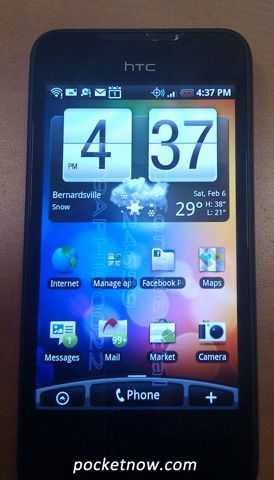 Pocketnow.com has gotten its hands on some images and a video of the HTC Incredible, and upcoming phone which looks quite a bit like the HTC HD2 and appears to be on its way to Verizon (the boot sequence shows a Verizon animation in the video.) Despite aesthetic similarities between the HD2, the Incredible comes with Android 2.1, which I’ve been wishing was available on the HD2 the HD2 (it uses Windows Mobile instead). The phone is equipped with HTC’s ‘sense’ UI which is a custom interface on top of Android. The Incredible has a Snapdragon chipset, presumably at 1GHz; 256MB of RAM, 800×480 3.5-3.7 inch screen which the Pocketnow tipster thinks may be AMOLED. The back of the phone has a large looking lens with dual-LED flash, no word on the megapixelage yet, but my bet is on 5.0MP. The phone looks very responsive in the video. Click here to have a look at the video.