Notion Ink Adam Shown off on Video by Co-Founder

Update: Notion Ink Adam specifications and links are now in the database. 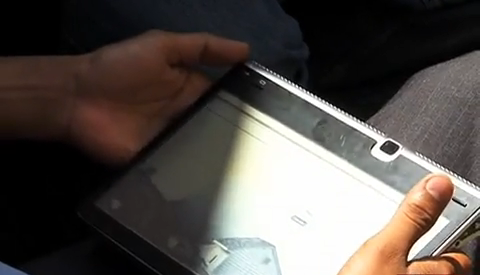 A  video published last week by the Times of India has Notion Ink co-founder Rohan Shravan showing off what is being called a â€œfinal inch version of the ever intriguing Adam tablet. The video has some nice close-ups of the unit, but it still doesn’t seem like the production version (and I hope not as part of the screen bezel comes off mid-interview), though Rohan says that it is final in terms of â€œlook and feel inch and that the device should launch first in the US in June. He also claims that the device will last for more than 10 hours doing 1080p video output. I’ll still have to see it for myself before I believe it, but I sure hope that the Nvidia Tegra 2 hardware is capable of backing that claim. Still no word on pricing. There is also an interesting interview with both Notion Ink co-founders if you care to have a look.