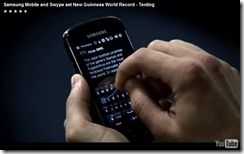 Swype, an application I’ve tested, and was impressed with, on the Archos 5 has just been used to set a new world record for mobile phone input.

The 160-character sentence took just 35 seconds to input which is an average 4.5 characters per second. That’s faster than I type on a full size keyboard and three times the speed I get to on an iPhone. Twice the speed of one of the best slider keyboards out there the OQO Model 02 and faster than I can achieve on most netbooks. Phew!