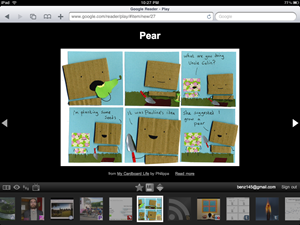 Google somewhat quietly released Google Reader Play early last month. Reader Play is essentially an alternate way to view Google Reader and is designed to present interesting and relevant items in a simple and pleasing way — it seems particularly suited to large screened devices. While several people, upon release, noted that Reader Play would probably work great on large TVs, the first thing that came to my mind was how well it could work with the iPad. Of course, that was only a theory because we didn’t have an iPad at the time for testing. Now that the iPad has been released, we can give it a try.

To my delight, Reader Play works pretty darn well on the iPad. Part of this is because YouTube videos can be played directly inside Reader Play, without having to launch out to the external viewer. Note that this isn’t Flash, it’s simply the iPad recognizing the video as a YouTube video and playing it with it’s own special YouTube player right inside the frame. Have a look at Google Reader Play in action on the iPad in the video below: