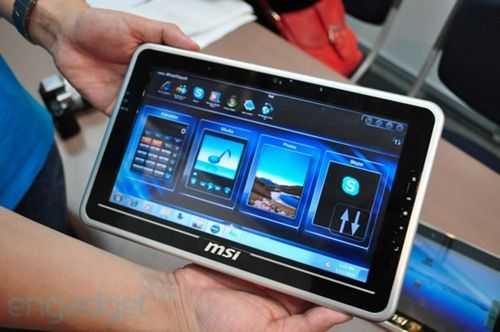 MSI, the maker of some fairly well regarded netbooks, is going to be bringing the â€œWind Pad 100 inch slate to market. The keyboardless 10 inch capacitive touch unit will be powered by the Atom Z530 CPU and will have HDMI out, presumably for 720p video output to an HDTV. The MSI product manager says that the MSI Wind Pad 100 will be available â€œlater this year inch for $499, according to Engadget.

Sadly, the device will be running Windows 7 with an ugly tack-on touch interface which is sure to not be any more useful than the Origami ultra mobile PC software once was. Engadget is already saying the following about the â€œWind Touch inch UI:

Our biggest concern about the tablet comes down to speed. We noticed it taking a few seconds for applications to launch, and the Wind Touch UI was incredibly sluggish. Speaking of the UI, it’s just a basic skin on top of Windows and is clearly still being tweaked.

I couldn’t tell you exactly why MSI (or anyone for that matter) thinks that slates running Windows 7 will be even the slightest bit consumer friendly. MSI (and again, anyone else) will not be able to provide a good computing experience with an interface that just sits on top of Windows.