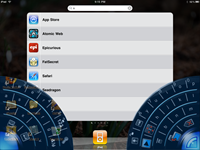 I was really surprised that Apple didn’t do anything â€œmagical inch or â€œrevolutionary inch with the iPad’s [Portal page] on-screen-keyboard. The iPhone’s was definitely revolutionary because it was probably the first truly viable OSK â€“ thanks to some intelligent software design and a capacitive screen instead of a resistive one. The iPad’s keyboard has that same inteiilgent software design, and a nice big capacitive screen. The problem is the big part. The iPad’s keyboard works well, but it really only works well if you can set it down on a desk in front of you so that you can touch type on it. If you are walking around with it in your hands, it works quite poorly for thumb typing. This fact alone makes the iPad annoying to use for typing if you don’t have something to set it down on.

Even since I got the iPad in my hands, I’ve been wishing for a Dial Keys-style keyboard implementation. Dial Keys, if you’ll recall, is a piece of Windows based software that was designed for touchscreen UMPCs. Dial Keys places a split radial keyboard at the corners of the device, which puts keys right in the range of one’s thumbs. If Apple allowed developers to modify the keyboard on the device, I’m sure we would have already seen something similar.

I made some mockup graphics to put on the iPad just to see what Dial Keys on the iPad would look like: