Toshiba AC100 – Making the Same Mistakes as the Airlife 100. 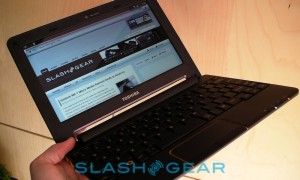 I reviewed the Compaq Airlife 100 last month. It was a device that both excited me and yet at the same time, highlighted the huge gap that exists between Android and a full-internet, desktop computing environment. The slim, lightweight, location-enabled, app-store enabled always-on, always connected capabilities are something that every netbook designer is going to have to think about soon and yet the simple ‘slave’ nature of the device (try hosting peripherals) and the huge gap between the Android browser and the desktop browser becomes a roadblock to productivity. The same must be said of the relatively immature and slim applications suite.

Will the Toshiba AC100 fix that? With Android 2.1 you can’t expect anything to be that different although there’s some hope in the fact that Toshiba are implementing the Opera Mobile (not Mini) application as the default browser and promising Flash support soon. The Tegra 250 platform should provide some processing oomph too.

But does it have the Google Marketplace? It doesn’t look like it which means you’ll get tripped-up the first time you go to use your contacts – they won’t be there. Neither will Gmail, or Google Maps, Buzz, Latitude, Goggles, Sky Map and tens of thousands of applications. It’s possible that the final retail versions will have the marketplace, in which case, we’ll take another look but checking out Slashgear’s demo video and marketing images, you get the impression that the AC100 is sans-Marketplace.

Without the Google Marketplace, Android is a barebones OS that won’t satisfy anyone sitting at a desk and that’s the core issue for all large-screen Android devices. Until someone fixes it, Android for creativity and productivity is a no-no. The Toshiba AC100 may win customers with a good price but with 3G on-board, we suspect it’s just another toe-in-the water for carriers and will be priced up at the high-end of the range limiting it to the same target customer as the Airlife 100.

Again, there’s potential here and nothing wrong with the hardware platform but those software issues need to be fixed before the wider audience will accept this solution as a true netbook competitor.