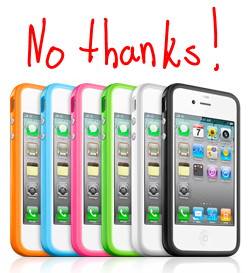 Apple’s press conference is still doing some Q&A as I write, but the gist of it consisted of Apple saying that all phones have the reception issue when held in certain ways and that they don’t actually have a problem that is unique to their device. Still, they say that they want to make customers happy and so they are offering a free case to iPhone users or accepting returns for full refunds through September 30th. Apple says they will present a few different cases for customers to choose from as they are unable to make their own first-party bumper cases quickly enough to keep up with demand. Apple also says that if you bought a bumper case, you’ll be refunded, however, third-party cases will not receive refunds. Customers can apply for free cases from Apple on their site, â€œlate next week inch.

I wrote yesterday about why a free case wasn’t going to cut it:

Hearing Apple say that they don’t think they have a problem when myself, and many others have been putting up with the issue, is very frustrating. This feels like a good opportunity to go for a new phone. I’ve been using the iPhone since the 3G, but I’d totally snag a Droid X [portal page] or HTC Evo 4G [portal page] if I could; the major roadblock for me is that neither of those phones are available on AT&T, and at the moment there really aren’t a lot of good options to choose from other than the iPhone on AT&T.

The only phone I’d likely consider is the upcoming Samsung Captivate which is due to be released on the 18th. Apple is offering a â€œfull inch refund on the iPhone 4, which for me would mean $299 back, but if AT&T doesn’t return my upgrade availability then I won’t be able to get a subsidized deal on a new phone, thus making returning the phone a huge waste of money. I just locked an offer in with Gazelle.com to sell the iPhone 4 for $493, just in case.

Let’s not forget that I had to agree to a new two-year AT&T contract to purchase the iPhone 4, and I’m doubting that AT&T will undo that if I return the phone. Apple was very unclear on this point in their press conference, but if AT&T doesn’t return â€œupgrade eligibility inch to customers who return their phones, then you’d be better off selling your phone to recoup the costs than returning it to Apple.