It’s just so depressing to see this. 2nd generation Android tablets coming out from Archos that still don’t have Google apps included. No contacts sync. No Gmail. No Buzz. No Maps. No Latitude. No Market. Again – No Google Market!

I hate to start on such a low note but really, haven’t we all learned that an Android device without Google apps is only half an Android product? 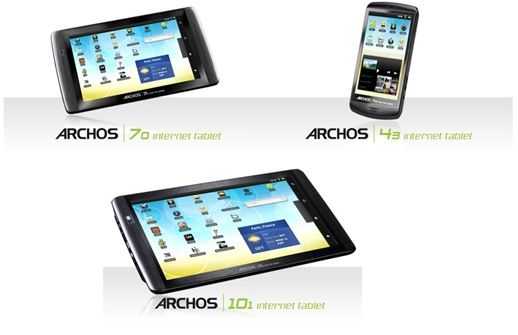 Moving on to the details then. We have two sub 4 inch devices that we’re not covering here, a 4.3 inch device (Archos 43) with a resistive (cough) screen that will ‘eventually’ replace the Archos 5 (according to Engadget this will also upset the patient Archos 5 owners that are wanting  2.x upgrades) , a 7 inch tablet (Archos 70) with a capacitive screenâ€¦wait for itâ€¦ at 800×480 resolution and a 10 inch device (Archos 101) with a 420 gram, 1024×600 capacitive screen.

It’s the 10 inch device that appears to have the right ingredients. At 420gm that’s ebook-light and if Archos are including their video playback skills (we assume they are due to the HDMI-out) then you’ve got yourself a flexible friend there assuming you can handle a bit of sideloading.

There’s a ton of specs on the Archos UK site and they include Android 2.2, a 1Ghz CPU and multitouch on the capacitive screens. Unfortunately, I don’t see any mention of 3G.

Should we discuss below? We’ll get the specs in the DB as soon as we can.

Info via Engadget who have a hands-on report.