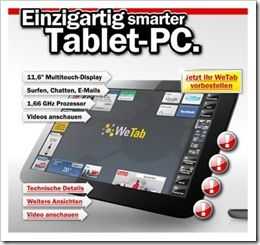 Although the WeTab (formerly WePad) has been available for pre-order on Amazon for some time, there’s been some doubt about whether it really is going to launch but with the recent discovery of an advert on one of the biggest German electronic stores website, it looks like the WeTab really is on track.

The WeTab is built on an Intel platform with a standard Linux core and a self-built user interface. I’m interested to see if WeTab have used any MeeGo components. I’m also interested to see the battery life. The WePad is based on a Pinetrail platform which can idle down to about 4-5W but jumps to 7-12W when in use. If the device is 800gm then we’re only talking about a 25-30Wh battery which means 3-4hours in use. Compare that to the iPad at the same weight and you’ve got a serious disadvantage.

The WeTab is an interesting project that has gained an amazing amount of traction but unless the UI is something really really special, I personally think that it’s going to disappoint. We look forward to mid Sept where I’m sure we’ll see it at Intel’s IDF.