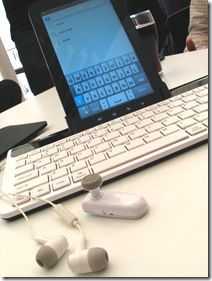 In our meeting with Samsung today they came clean about pricing. We also heard about the CPU, some Samsung Market information and got a look at the accessory pack.

Pricing is indeed 799 Euro. This is, however, ‘u.v.p’ which is the same as ‘recommended retail price.’ What this means is that Samsung have built in a big pricing buffer that their customers (the carriers and resellers) can play with. We’re expecting street prices to be way lower than this and we saw a few nods when we mentioned 500 Euros. I get the impression we’re going to see early pricing hit 700 immediately and then a decline to the 600 mark over the next 3 months. Yes, the Galaxy Tab is expensive, but not as expensive as we first thought. Note: German pricing includes 19% tax. 670 Euros is the pre-tax price.

If we’re lucky, Viewsonic will get that truly comparable, although not as sweet, Viewpad 7 out for 399 Euro and make Samsung think twice! 400 certainly seems the right price point for a full 3G, GPS, compass, capacitive touch equipped consumer Android tablet.

Note about the O2 price mentioned in the video (via Twitter) beware, it could be a contract for the hardware only. O2 Germany usually offer all their mobile devices in separate hardware / call / data contracts. That would bring the cost of the device to 759 Euros not the cheap deal it might seem.

On the Samsung Market: It sits alongside the Google Market and offers developers a channel for Galaxy specific apps to be built for the device. Samsung will launch a promo campaign for this shortly.

Anyway, on to the video….