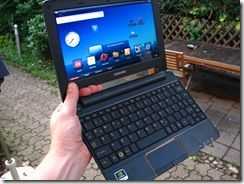 Despite the incomplete nature of these ‘smart’ books I’ve been testing, I’m still positive that the form factor and ARM-based processor has a lot to offer and that it will greatly influence the netbook of the future. People will say that the smart ‘book’ is dead but I guarantee that if Apple were to release a MacBook iAir running on iOS, the worlds axis would change and it would become the next best thing. Smart ‘books’ aren’t dead, they’re just gestating.

I’ll be continuing to test various devices with various operating systems and applications and in this video you’ll see me test a number of applications that are working out well on the AC100. Many applications don’t work well but the nice thing about a marketplace with thousands and thousands of applications in it is that you have options. All applications shown have been sideloaded using this method.

I have a 3G AC100 on order and am looking forward to new Froyo-based firmware soon so stay tuned for more testing.