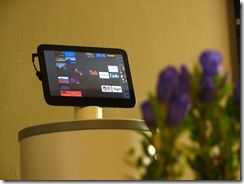 I was fortunate enough to bump into Stephan Odoerfer of 4TiiToo on my way to San Francisco last week. 4TiiToo are one of the two companies that are responsible for the WeTab and being with Stephan on a 10hr flight gave me a good chance to test the device out, albeit without Internet. The WeTab is the first MeeGo-based product to hit the market and although it’s not quite what you’d expect if you’ve tested out MeeGo betas on your netbook, it does show what’s possible with the core system and QT-based user interface.  Shipments started yesterday and we’re expecting the first retail reviews very soon.

One of the first ‘retail’ reports I’ve seen so far is from one of the WeTab partners, AndroidPIT [report in German], who are to provide the marketplace for the Android ‘virtual machine’ that will form part of the operating system. That won’t ship in initial versions of the device and it should also be noted that Intel’s AppUp is also unavailable for MeeGo at this time. I’m not expecting the WeTab to have any sort of ‘store’ before the end of the year which could limit its flexibility in the early months and shock a few reviewers as they work past the fun user interface into ‘getting things done’ territory.

At about 1KG (it feels heavier than the stated 800gm) the WeTab is without a doubt a two-handed device that will be used in much the same way as the iPad propped up on a table. Belly-surfing (my new word for laying down on the couch and propping the device on the stomach) is also possible as is the classic sit-and-read position but just as with the iPad, the weight becomes noticeable after a short while.

WeTab had some real design challenges on their hand when they made the early decisions on the WeTab tablet. Firstly, they needed to satisfy requirements of publishers who need a large-screen on which to typeset their content and advertising. Secondly, WeTab had only a few choices of platform. Starting with a Celeron processor back in the day, the final choice was the cheap and cheerful netbook platform. With a 10 inch+ form factor the netbook platform fits but it’s certainly not the most efficient of platforms. A switch to Oaktrail in 2011 seems like a no-brainer for a ‘WeTab Plus’ bringing lighter weight, thinner design and a much much better screen-off active standby mode. Oh, and while we’re talking about the screen, don’t forget that the backlight on that is going to take a lot of power. I’ve estimated in-use battery life to be in the 4hr range for the WeTab but I know for a fact that if you hit up YouTube too hard along with a bunch of browser tabs and apps, you’ll be feeling the heat build and watching the battery drain to zero in under 3hrs. Thank goodness there’s a charging/docking port on the bottom of the device.

I like what WeTab are doing here and I’m impressed at the following they’ve created in the tech community but I’m not too positive about sales numbers for WeTab V1. Apart from what appears to be a sub-optimal size and weight,  its early reviewers are going to be less than impressed at the lack of applications on the device. OpenOffice, a browser, media player and an email client are included but where are reviewers and early owners going to get their ‘buzz’ from? The UI? My feeling is that the WeTab needs more than just a flashy user interface and it highlights the issues that all MeeGo devices are going to have until the AppUp or Ovi store appears to fill the gap. When AppUp and Android arrive on the device, you’ll be looking at a different picture so I hope those early reviews don’t hang around on Google for too long!

Check out our WeTab page for images, links, videos and of course, specifications.