The ExoPC is an 11.6 inch Windows Tablet PC that has been getting favorable previews recently, largely because of its interesting overlay software. The device will also ship with an application store and will have HD video options, 3G and GPS options and a nice looking set of optional accessories.

In its homeland of Canada it looks like the ExoPC will also launch as the Vibe with the basic 32GB non-3G version coming in at 649 Canadian Dollars / $599 which, for a 4-hour WiFi-only device built on the Intel netbook platform, isn’t that cheap although you do get 2GB of RAM, SSD storage and the nice capacitive screen. In Europe, the device is being retailed through Mobiland in Portugal as the Mobi One. Europeans will have to hand over a fat 837 Euros (inclusive taxes) for the same basic model. Add 3G and another 32GB of SSD storage and you’re up to over â‚¬1050! 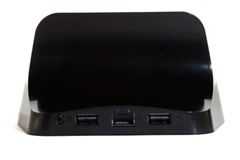 Considering the WeTab, which uses the same hardware platform, is available in Germany for â‚¬569 with 3G (1GB RAM) and that it’s just been hacked to run Windows 7, they might want to re-think that â‚¬1050 price. With the Tega V2 coming to EU, North America and Australia too, there’s another options too. [Latest: A Tega V2 is on its way to us for a Friday unboxing, pricing should also be available on Friday.]

Despite the alternatives, the ExoPC remains a unique product out of the box and with the docking station, stand and keyboard, should make for quite the productive sub-1500gm 11 inch modular PC.