Carrypad started in 2006 with the idea that there should be a mobile device that is “the parent of the smartphone… It is the offspring and partner of the PC. inch [Ref] In the last 4 years we’ve seen a range of good devices from mini tablets to mini PC’s. Nokia nearly hit the mark a couple of times with their Linux tablet devices and Archos have been very close in this area too but no-one has really got it together to make a device that converges all the functions in our ‘Ring of FIE’ into a high quality product. Samsung may have just hit the nail on the head with the Galaxy Tab though. We’re not calling this a complete convergent smartphone/PC hybrid but as a ‘Carrypad’ , a mobile Internet device,  this is shaping up to be a leading example.

Here’s a full, in-depth review of the 16GB Samsung Galaxy Tab, (European 3G Version) supplied by TechDepot in Germany. (Part of the OfficeDepot group) Many thanks to them for their support.

Our Galaxy Tab Forum is here.

This review will be published in three parts.

In the unboxing video you’ll see a look around the device and an an initial switch-on test. We received a German model but changing languages for the UI, keyboard and built-in dictionary is no problem. We’re running the device in English with no traces of the original language to be seen at all around the device.

We’re very disappointed that Samsung haven’t included a soft case in the box because the Tab really needs it. The smooth, slippery casing (especially in cooler, drier environments) means you need to keep it wrapped when transporting it. We’ve dropped the Tab once already (it survived) and now use an old Samsung ultra mobile PC soft case to keep it protected. A car charger or stand would have been a nice touch but unfortunately, you’ll only get a USB wall adaptor (high current for 3.5hr charging) and a docking-port cable for USB connectivity (and charging through a USB port as a slower rate than with the wall adaptor.) A small getting-started manual is also included along with a reasonably good quality ear-bud headset (headphones+mic) with 3.5mm connector. 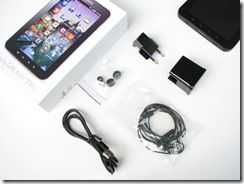 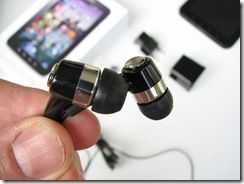 Our first impressions of the device (published here) were positive. We commented on the completeness of the product and the ‘value-add’ that Samsung have dotted all over the device. From the large-screen optimised applications suite (email, contacts, calendar, notes and more) to the camera software and additional 3rd party applications such as the ‘readers hub’ and office suite. More about those in Part 2. Overall, we think the quality is extremely high. As for iPad ‘wow-factor’ comparisons, let’s get that out of the way now. The user-interface is not as smooth as an iPad. The inherent issues (open multitasking) mean that there’s always a possibility that another application hogs just a little too much of the CPU and causes a delay in a screen transition or input action. The ‘magic’ of the iPad that is down to the amazing user interface physics and screen size just aren’t there in the Tab. It’s good, fast and usable top notch even – but don’t expect that iPad UI magic.

In the first 24hrs our only real disappointment was the slippery plastic we mentioned. It makes it a little difficult to hold from the side for e-book or web reading. A thin screen frame might look smart but doesn’t help here either. A couple of pieces of stick-on tape will fix this but hardcore e-book readers will want to take note of this.

We are very proud of our live open review sessions at Carrypad. They give you a chance to see the device in an unedited way with multiple reviewers and a live chat session that allows you to interact with us as we test. Parts of the session are recorded and  made available, again, unedited. It’s a tough time for a new device and we usually uncover all the hidden warts.

Thanks to JKK of JKKmobile for his help in the live sessions.

The trend for minimalist devices continues with the Galaxy Tab with a smooth finish of good quality plastics, covered ports, 4 capacitive Android button areas (backlight triggered for 5s by use or screen touches) and just two physical buttons. Only the docking connector and headset port are exposed. A thin frame gives the screen an efficient look although limits one-handed gripping points. The weight is a superb 380gm (0.83oz) which in this size of device feels great. One-handed use is really no problem.

The plastics are slippery and this is probably due to a wipe-clean coating. Cleaning it would be easy if Samsung had provided a cloth! We’re again using an old Samsung ultra mobile PC accessory for this the 3M Scotch-Brite cleaning cloth. Highly recommended.

The two buttons are high quality and for power (or screen/button lock in applications such as the camera) and for volume up/down.

Due to a 360 degree rotation capability, the 3.5mm headset port can be ‘relocated’ if needed.

The built-in mic is located on the left hand side (portrait mode) and it’s a little too easy to cover with a thumb when using the device as a video camera. Here’s what you get if you’re not careful. Speakers (stereo) are surprisingly good and capable of filling a room with radio-like quality and volumes.

On the right hand side are two covered slots for SIM card and micro-SDHC. Both are hot-swappable.

A front-facing camera (1.3Mp, usable for standard 3G video calling on this model) and back camera (auto-focus, 3Mp) with good quality LED lamp (auto, usable for video too) and ambient light sensor complete the look around the device. [Link: Sample photos can be found in our gallery here.]

There’s no stand, no micro-USB  connector, no USB OTG, no camera lens cover, no shutter button and importantly, no indicator lamps on the Galaxy Tab.

We’d love to pull the Tab apart to see just how Samsung squeezed everything, including a 15wh battery (3x the size of a smartphone battery) into the casing but unfortunately, we’re dealing with a sealed unit here which means there’s no ability to swap-out batteries. Effectively, you’ve got a Samsung Galaxy S smartphone with a huge screen. 1Ghz Samsung Hummingbird (one of the fastest ARM V7 implementations) CPU with 512MB ram, 16GB of flash (12Gb available for user storage) and a suite of features, some of which would make netbooks and notebooks blush.

There’s not much missing although wouldn’t it have been nice to see an FM radio and USB On-The-Go support? We think so.

Naturally the device is fanless and silent in operation.

Samsung have some amazing in-house screen technology. We’re still blown away with the quality of the Samsung LCD panel on our old Q1 Ultra ultra mobile PC and the screen on the Tab is just as good. Yes, it’s an LED-backlit LCD screen and not the latest Super AMOLED screen and that’s likely to be for a number of reasons.  Cost is the primary factor, availability may be an issue too. There’s also sunlight and battery drain to consider. A full-white screen (as seen on many we pages) taxes OLED considerably to the point where we suspect the battery drain would be more than on the LED-backlit panel you have on the Tab.

Viewing angles are exceptional.
All images taken with the same camera settings.

Fear not though, the quality is superb; And adjustable. Black-level, white level, saturation, brightness are controllable and there’s a power-save mode which, when turned off, gives the screen an awesome level of brightness.  There’s little to moan about, apart from, perhaps, the lowest-level of brightness. Ask a gadget-loving, night-reading husbands how important this is because in a dark room, the lowest setting is still too bright.

The screen is glossy and that will affect outdoor and in-car use. We recommend looking for a filtering screen protector in this case.

Readers that are familiar with Android will be at home here although Samsung have added some nice bells and whistles that add value rather than trying to ‘skin’ the UI. Touch response and transitions are very good (see above for iPad comments) and Samsung have pre-installed a few quality widgets, one of which we’re still using after a week that’s rare for us!

Up to nine home-screens can be added. A pinch brings you to the overview. We’ve settled for just two screens due to the space available for widgets and shortcuts; A 5 x 5 grid is available for icons. Samsung have a fixed applications widget on the bottom of the screen that is flanked by two configurable spaces. Contacts and Browser are the obvious choices for these positions.

The applications pages are tailored and slide sideways. Pages are directly accessible via small page indicators at the top of the screen but we seem to be missing a way to sort or re-organise the icons. Newly installed applications simply add to the last screen. [Correction: There’s an Edit mode that allows a long-press and then a drag of any icon in the applications list.]

Dear reader, your reviewer is a fan of physical keyboards. He likes slider form-factor devices and eyes-off typing when possible. The Samsung Galaxy Tab might have changed his opinions about that though because in portrait mode,the on-screen keyboard which pops up to cover about 40% of the screen, is one of the best thumbing experiences he’s ever had.

Samsung’s own keyboard (using XT9 technology for configurable word-prediction, correction, word learning and more) is really, really good. We’ve already written two articles with it, one of which was over 1500 words long and the speed is high, stress levels are surprisingly low, better than most physical thumb keyboards. The width is perfect, the weight of the device isn’t a problem and the haptic feedback actually feels like it’s working without any lag. (We turned off the key click sound because that does lag!) It’s obviously not as fast as a touch-typing keyboard but for an on-screen keyboard, it’s up there.

Want to see six minutes of thumb typing on the OSK? Be our guest here on this video.

In landscape mode it’s a slightly different matter with the keyboard being too wide for thumb typing and too small for table-top touch typing but with 600 pixels wide in portrait mode, we’re rarely using it for typing any other way.

If the Samsung keyboard doesn’t work for you, try the included Swype keyboard. We haven’t found much reason to use it yet but for one-finger action, it could be better with some practice. Alternatively, there’s a bunch of keyboards available in the market. We haven’t found the need to try them though. We’ll add a video demo of the Swype keyboard in due course.

Open source Android 2.2 is not what many people think it is. It’s a relatively raw experience with no Market, no Google applications and only a basic suite of core applications. It’s what we’ve been seeing on many of the low-cost tablets coming in from China. Google-certified Android is another matter and thankfully, it’s what we’ve got here on the Tab. Google Market is available along with Gmail, Google Maps, the YouTube player and other important applications that Android smartphone users would be shocked to see missing.

In Part 2 we take a detailed look at the applications – Available here.

In Part 3 we look at the camera, video and performance, other features and give a summary of the device.