We’ve had the (final version) Viewsonic Viewpad 7 for 2 days now and last night we completed 3hrs of live testing in front of an audience of 480 people. We’re now in a good position to be able to bring you a good round-up review of the device. Live recordings of the stream are embedded below. Unboxing video is here. Thanks to Viewsonic Europe for sending the device over. UK customers can find details of a trade-in offer and retailers here.

Overall quality of the £400 pound tablet is good and we feel that Viewsonic have got the price/quality ratio right. This is a lot more than a £200 open-source Android tablet here and less than a £500 high-end 7 inch Tablet (e.g. Galaxy Tab) and it sits alone as the cheapest 7 inch 3G+Voice Google Android tablet on the market. ‘Google’ means that it really does have everything that you find on a Google Android phone including voice capability, compass, GPS, compass, capacitive touchscreen and the latest Android software.  So why is the Viewpad 7 cheaper than the Galaxy Tab then?

Let’s start with the processor that tricked me. I was originally told it was a Snapdragon CPU at 600Mhz but despite some reasonable Web performance, it turned out to be an ARM11-based device. In real-use yesterday I was still quite happy with the browsing speeds and although I would never recommend anyone get an ARM11-based device for serious web work, when laid-back in a passive usage mode, it’s quite acceptable. You’ll see some browser tests in part 3 of the video review below. The GPU, Adreno 200 – the same as that found on the Snapdragon platform, is probably helping a lot here because UI actions seem smooth, if not ‘physical’ like the iPad.  Android 2.2 helps too. It’s a far more efficient build than 2.1 and helps to pull everything possible out of the platform. This is probably as good as we’ll ever see on an ARM11-based device and at this point it has to be said that this is the best ARM11-based mobile internet device I’ve ever used. 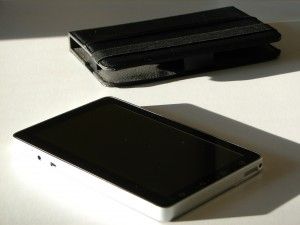 There are more hints of ‘value’ though that don’t hide themselves so well:

On the positive side, we saw great 3D performance in synthetic tests and games with Angry Birds and Raging Thunder Lite working perfectly. There are other high-points too.

3G throughput in our tests was good. We haven’t tested reception performance.

Battery life. In our 1-hour test with screen, Wi-Fi, GSM enabled and under testing conditions saw the battery drop 15% indicating a 6-hour heavy-use run-time. It matches the Viewsonic specs and in the rest of our testing over the last few days we were also seeing similar battery performance. We estimate the battery life to be 10-15% less than the Galaxy Tab but still, very good. Charging over USB is a slow process. Expect 8-9hrs for a full charge over a standard USB cable. We can’t get the supplied charger to work through our UK-EU adaptor but we’re told it does enable a ‘fast charge’ mode of around 3hrs.

Speaker quality is good which makes the Viewpad 7 perfect for radio, MP3 and podcast duties around the house. In a 20-minute speakerphone call, quality was very high. We also made a successful Skype call without headphones.

Viewsonic notified me that the case has been re-designed for the final version. Its good to see that it now includes ‘standing’ capability. 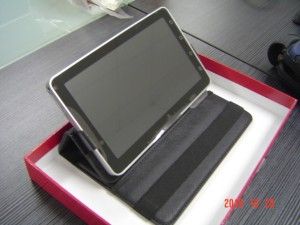 At £400 we find the Viewpad fairly priced. If you’re in the UK and have a working netbook or laptop you want to trade-in, Viewsonic retail partners will give you 100 pounds cash-back which makes it tempting if that old EeePC 701 is gathering dust for you. Ultimately though, Viewsonic need to capitalise on the fact that this is a well-rounded ‘value’ tablet with a complete feature set, today. In 3 months time when Android devices 2.3 appear, when ARM11 becomes ‘end of line’ for some applications, when high-end applications start demanding more of a CPU and when the market fills with other device options, it may not look so attractive and at that point Viewsonic and their retailers will have to compete in a price war. We say, ‘take the risk’ and drop the price by 50 pounds to capitalise on holiday-season buying and make this an even more attractive package. Throw in a 4GB micro SD card, a cleaning cloth and maybe a free version of ‘launcher pro’ to solve that portrait mode homescreen limitation and you’ve got yourself a great little mobile internet device.