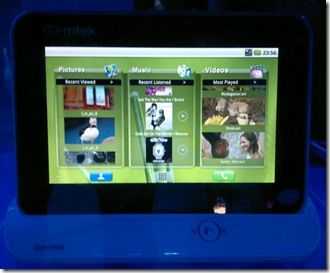 While ARM and Android is allowing designers to move mobile computing products into the personal computing space, Intel and Android are going in the other direction.

We’ve seen Android on X86 before and it doesn’t really impress when it’s on a standard PC platform with no always-on, GPS, 3G and market but when it’s shown on Moorestown, as it was last year at MWC, it’s another matter, especially when it’s Intel’s official build of Froyo for the Moorestown platform.  Here it is again in the Gemtek Zeus home tablet with an updated user interface. We weren’t able to get the full specs or even play around with this home phone/automation tablet but we did happen to bump into the product manager while we were filming. He says that the product is due in Q2 and after we had finished filming, revealed that they are also working on a MeeGo 1.2 product for later in the year.