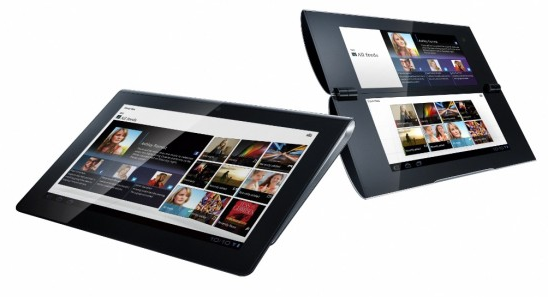 Sony has caused a buzz in the Android tablet market by announcing not one, but two Sony Tablets which will be available globally come Q3, 2011.

Both of the Sony Tablets are designed to deliver  “an entertainment experience where users can enjoy cloud-based services on-the-go at any time”, with Sony aiming to “create a new lifestyle by integrating consumer hardware, including ‘Sony Tablet’ with content and network inch. Here’s a quick video showing the tablets during Sony’s announcement:

Sony has yet to announce official names for the two tablets and therefore generic development names  are used during the Sony press release.

Codenamed S1, the first tablet spots a 9.4″ display and is of a conventional iPad-like tablet form factor.

The form of the S1 differs from others tablets as it is shaped like a wedge for a more intuitive grip. Sony hopes that designing a tablet with good ergonomics by creating an off-center of gravity form factor will offer prolonged period of comfortable use. This design feature may prove to benefit users like myself who commute daily on public trains and prone to standing upright and gripping a tablet with one or two hands for extended periods of time.

If you own any Sony Bravia entertainment devices, you will be glad to know that the S1 works as an infrared universal remote control, allowing you to converge your numerous Bravia remote control units onto the S1.

The S1 also has DLNA that allows users to stream AV content to televisions or wireless speakers.

The Sony S1 specifications are:

Codenamed S2, the second tablet is innovative in design – a foldable clam-shell form factor with two 5.5 inch display touchscreens not unlike  the Kyocera Echo.

Similar to the Echo, both screen can be used as a single, combined large display or with each screen running different functions such as a media player on one screen and a soft onscreen control on the other.

The Sony S2 specifications are:

Both tablets will be optimised for accessing Sony’s Qriocity network services for rich media content.

Gamers will also not be disappointed as both tablets are Playstation certified which means that they will be able to play Playstation 1 games and similar to the Sony Ericsson Xperia Play mobile phone, be able to play games made specially for the mobile platforms which are published by Sony and available on the Playstation Suite online store.  The S2 may be more suited for gaming than the S1 with its dual screens, allowing the game to be played on the first screen and on screen controls on the second screen which prevents the user’s fingers from obscuring gameplay.

Both tablets will run the latest Android 3.0 (Honeycomb) operating system and are WiFi and WAN (3G/4G) capable.

Judging from the numerous features on offer, Sony is serious in targeting its S1 slate and S2 clamshell at a broad consumer spectrum in the tablet market.