On Wednesday Google updated their awesome Maps for Android application to include the ability to download portions of the map for offline access, and full-featured transit directions. With these updates and other features that Maps for Android has had for a long time, the Android version of the application is lightyears ahead of Maps for iOS, read on to find out why.

Google Maps is now running version 5.7 on Android devices, and users now have global access to transit directions. Just pick an address and Google will tell you how to best get there through a combination of public transit options trains, busses, subways, etc. Here’s how it works:

In addition to transit directions, which are immensely useful when you’re within city limits, Google has added a new feature to the Labs section of Google Maps for Android: Download Map Area.

Download Map Area allows you to download the map in a 10 mile radius around any location that you choose.

To enable the ‘Download Map Area’ feature, launch Maps 5.7 on your Android device. Press the menu button while you’re looking at the map view then press the more button then press Labs. Scroll to the bottom of Labs to find the ‘Download Map Area’ item and click on it to enable it. You will see a green check mark next to the item letting you know that you’ve enabled it.

To use the feature, go to any Places page (places pages are the informational pages about a location that you find when you search through Google Maps. At the bottom of the Places page, you’ll find the ‘Download Map Area’ button which. when pressed, will initiate a download of the entire area within 10 miles.

You can also download the area around any location, even if you can’t pull it up through search. Just press-and-hold any location on the map to bring up a location marker, then press the arrow button on the right of the marker. You’ll find the same download option at the bottom of the list. 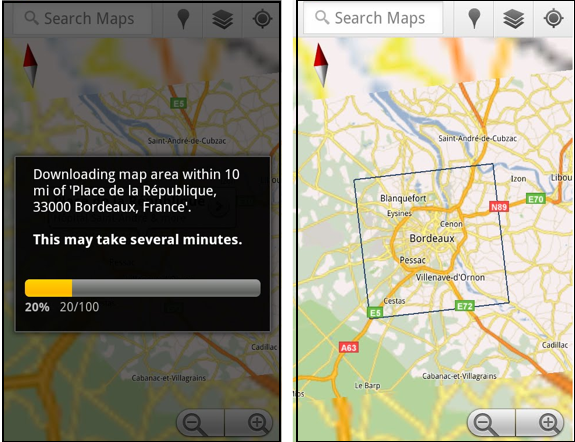 Thanks to vector tiles which were implemented with Google Maps for Android 5.0 back in December, a brief download gives you all the data you need to see street-level detail within the downloaded area, even if your phone is in airplane mode. The map will show an outline of the area that is available for offline access.

I’ve been an iPhone user since the iPhone 3G. Through the iPhone 3G, 3GS, and 4, Google Maps has been one of my most consistently used applications. Still, I’ve always been jealous of Google Maps on Android. These recent updates to Maps for Android just put it that much further beyond Maps for iOS.

One Reason Why Maps for iOS is Behind

Maps on iOS works very well, but is seriously lacking in the features department and lacks a crucial component that Maps for Android has: updatability.

It’s unclear whether or not Maps for iOS can be updated through the App Store like third-party apps, but what is clear is that Apple has never pushed a single update to Maps in this manner. They appear to be stuck updating Maps whenever major firmware updates are released, which are few and far between (perhaps once per year).

Google’s completely free Navigation app for Android provides best in class turn-by-turn navigation to any Android device that has GPS. It’s arguably even better than most dedicated GPS road units.

Maps for iOS will obligingly give you great walking, driving, or transit directions, but there is no turn-by-turn navigation. When finding a route on Maps for iOS you also have no option to view alternate routes, no option to avoid toll roads, and no way to automatically route around traffic.

The best you get is a visual map of your route, or a list of directions. Trying to following directions on Maps for iOS while driving by yourself is dangerous because of the total lack of turn-by-turn guidance. In these situations, having a co-pilot to track your progress on the route, tell you which turns to take, and when you should be turning, is a must. For me, this is the biggest weakness of Maps for iOS.

Simply put, Maps for Android does a whole lot more than its iOS counterpart. Here’s just a short list of the things that Maps for iOS is lacking.

Vector tiles: Maps 5.0 for Android introduced vector tiles which have a number of advantages. Here’s what we wrote about Maps 5.0 from our review of the first device that got that update, the Nexus S —

The latest version of Google Maps looks quite similar to the old, but the underlying system is vastly different. Instead of using static image tiles at varying zoom levels, Maps is now using vector tiles which boast a number of advantages. Vector graphics can be dynamically scaled to any resolution and still retain their sharpness. Now, instead of downloading one tile for each zoom level, you may only have to download one tile for a particular area and then it is scaled to any level of zoom. This means less downloading (less data usage) and easier caching (storing for use later/offline)

Vector graphics also allow the map text to stay right side up even as you rotate the map. Additionally, you can now use two-fingers to tilt the map to get a different angle (again, thanks to vector graphics). And you’ll be able to see 3D buildings in places where it’s supported.

Latitude Built-in: Maps for Android puts your Latitude friends right there on the map, and allows you to ping other Android phones for quick location updates. Maps on iOS lacks Latitude entirely. Latitude does exist as a separate app, but using the two interchangeably (ie: getting directions to a friend’s location) means switching back and forth between the apps, and the Latitude app on iOS doesn’t support quick location updates between you and your Latitude friends.

Topographic Maps: Maps for Android will give you terrain maps of pretty much anywhere. Not only can they be interesting to look at, but they are also useful for planning hikes and other trips.

No Google Account Integration: When you launch Maps for Android, everything is in sync with your Google Account. I can pull up custom maps and routes that I’ve made on the computer, all of my latitude friends are there, and I can see the places that I’ve starred. Maps for iOS doesn’t even consider your Google account, and in fact may not even know that such a thing exists.

Offline Access: And now, as we’ve seen, Maps for Android has offline access, allowing you to choose precisely where you want to download the maps for offline use. Offline map access in Maps for iOS is fickle and unpredictable. Despite the iPhone 3G and beyond having built-in GPS, the phones often act as though they don’t have no idea that they posses GPS chips when they lack a data connection. This is really bothersome when you’re in and out of data coverage, especially when hiking.

And that’s just a few of the big items! Here’s a list Google cooked up comparing Maps for Android to Maps for iOS: 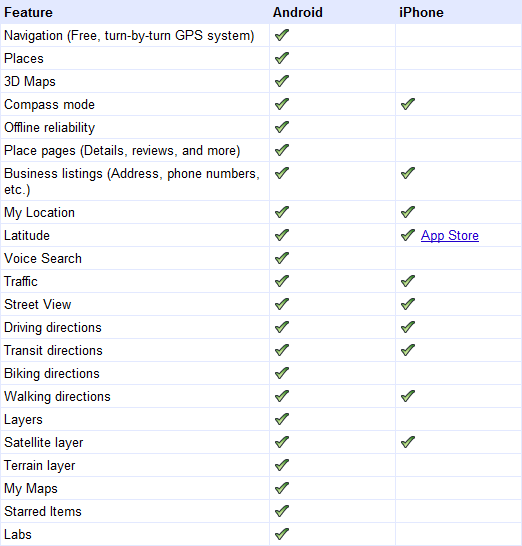 All these things combined put Maps for Android lightyears ahead of Maps for iOS in my book (even though it works well for what it does), and is definitely the #1 thing I’m jealous of as an iPhone user.