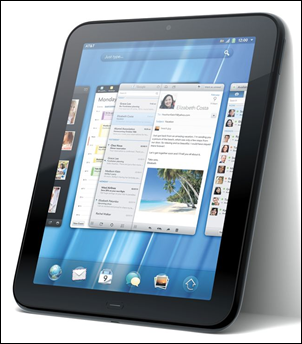 Today HP announced the first cellular version of their recently launched HP TouchPad. The device appears to be launching first with AT&T and will be braded as the TouchPad 4G (which I hate because AT&T’s ‘4G’ network is slow as hell compared to Verizon’s LTE). The real news here is that the TouchPad 4G comes with its CPU clocked to 1.5GHz, bumped up slightly from the 1.2GHz clock speed that we saw in the WiFi-only model that launched not even two weeks ago.

I don’t mean to gloat, but it does feel good when a prediction comes true. In addition to two other predictions I made about the TouchPad, I somehow managed to foresee a number of HP’s early moves regarding the TouchPad ecosystem. Here’s what I wrote back in June:

Clocking to 1.2GHz means that they’ve got some room to play with the speed down the road, and we may see a bump in clock speed at a later date, to keep the performance competitive

I will admit that I didn’t see it coming this early.

We knew early on that the Qualcomm Snapdragon APQ8060 found in the touchpad supports a maximum clock speed of 1.5GHz, but HP decided to take it down to 1.2GHz, likely for performance and battery life considerations. Qualcomm states that the APQ8060 offers a 60% increase in performance over ARM A9 dual-core CPUs that have been seen in a number of recent Android tablets, though I figured this stat is only valid when the APQ8060 is running at its full 1.5GHz speed.

Now that the TouchPad 4G will be running the MSM8060 (the variant of the APQ8060 that supports 3G/4G modems) at its full capacity, perhaps we’ll see that claim reflecting reality a bit more than early reviews have indicated.

According to This is My Next, HP won’t be bringing the just-shipped WiFi-only version of the TouchPad up to 1.5GHz through a software update or a subsequent hardware refresh. This seems a bit silly, and I think they may indeed decide to push the update through to WiFi only devices at a later date.

I also still stick to my prediction that we’ll see an HP TouchPad ‘1.5’ within 6-months of launch which has updated hardware (rather than a mere overclocking), though that may come in the form of a third-party WebOS device:

In my mind, I see HP releasing a TouchPad 1.5 sometime around 6 months after the TouchPad is released that adds some important ports and to bump the performance to compete with Kal-El devices and the iPad 3.