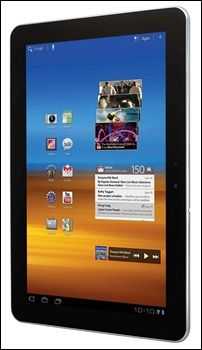 The 8.6mm thick Galaxy Tab 10.1 will be available for purchase in stores and online directly from Verizon. There are two colors to choose from – metallic grey or glossy white. Two memory options are available: 16GB and 32GB for $529 and $629 respectively, which undercuts the 3G iPad 2 by $100 for both capacities. Verizon says that the 4G connection built into the Galaxy Tab 10.1 will provide download speeds of 5-12 Mbps and upload speeds of 2-5 Mbps and the device will fall back to a 3G CDMA connection when not in range of 4G.

I’ve reached out to both Samsung and Verizon and they won’t share any info not already made available in the press release that went out 7 months ago. I just hope no one has been waiting this long to buy a 4G Galaxy Tab 7”… their devotion may leave them disappointed.