Acer Iconia Tab A500 And Honeycomb 3.1 in Productivity Test 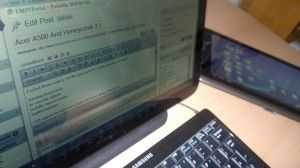 I’ve had Honeycomb 3.1 on the Acer Iconia Tab A500 for a week now and as I did with the Compaq Airlife and Toshiba AC100 last year, looking for signs that a smartbook is finally happening. The signs are there, yes, but there’s still a long way to go.

Check out a similar A500 productivity test by Jerry at Carrypad

I predicted that 2011 would be the year we would finally see ARM/Android devices move into productivity scenarios and it looks like the ASUS Transformer has achieved that with many recommending it as one of the best Honeycomb tablets out there. With its weight and price though it loses two features that the Toshiba AC100 had going for it but we’re moving in the right direction with the core operating system and that’s more important than weight and price right now.

Let me talk about a few of those core features in relation to my testing on the A500.

Not only does the full-size USB port on the A500 support a keyboard but it supports USB hubs, hard drives, USB sticks and mouse pointers. With the core operating system being keyboard and mouse ‘aware’, there’s a surprisingly smooth transition from desktop OS. Double-click to select a word works although there are clear limitations when it comes to drag and drop, especially between windows. It’s something I do a lot with text and images as a blogger. Importantly it seems to be stable and relaible too. Keyboard and mouse continues to be an important input and control mechanism for nearly everyone so let’s hope this gets improved.

That keyboard and mouse support extends to the browser too. The tab button switches to the next input field for example and you can scroll within a box without the whole screen scrolling with it but there are still critical issues. Input fields are hit-and-miss and my personal test of using the WordPress back-end, a complex web application, fails misserably. That’s an ExoPC in the image above with the A500 off to the side! Mouse-over functions aren’t working 100%, input fields are an issue and drop-down menus appear randomly in the WordPress back-end. Stability seems reasonable but you’re looking at a content consumption browser, not a full web experience. Firefox doesn’t do any better. Mouse-over still doesn’t seem to work and using the WordPress back-end I couldn’t even enter text or resize the Ajax input field.  I’m seeing similar brick walls in other complex web applications too.

The performance when browsing web-app pages is also noticeably slower than on a netbook, to the point where it becomes annoying.  Netbooks aren’t fast but in most cases, they’re acceptable. The wordpress back-end takes seconds longer on the A500 and tests patience. Sunspider is 150% as fast on a N450 single-core netbook than on the dual-core A500! (13ooms on ExoPC vs 2300ms on A500.) Genera processor power is still an issue on ARM devices. A 1.5Ghz dual-core or a 1Ghz quad core solution should be high on your list if you want to test productivity on devices like the A500 in the next round.

For those of you needing the full web experience, I can tell you now that you don’t need to read any further. Honeycomb is a fail in that respect.

On the bright side, progress is being made and yes, many people don’t need web apps. Here are some of the improvements I’ve noticed,

So we’re at a place where the experience is better than Toshiba AC100 but still a way away from productivity use. The browser and stability need to be improved along with a general improvement in speed and in applications which doesn’t seem to have happened in the last months. Honeycomb isn’t getting enough growth to spur developers to write Honeycomb applications yet and that’s a major worry because it is falling further behind the iPad and if it remains that way, there’s little incentive to write apps for it until Android 2.x and 3.x versions are merged in Ice Cream Sandwich.

One other thing – there’s that Movie Studio application. I’ll try and write a little more detail about it in another post because I’ve just edited a 720p video made on the Nokia N8 with it. It wasn’t a nice experience!

How long until it works?

For some, it works well enough today, for others, Android will never have the feature-set required because Honeycomb doesn’t aim to cover all niche scenarios. It’s a consumer, mass-market operating system designed to help Google make money through advertising in its applications. We musn’t forget that the core OS is actually free although there’s clearly quite an expense involved in getting it suited and booted for the consumer.

For many, Android is getting close. We are seeing adoption in productivity scenarios already and the more apps that appear, the less the browser is required and the less of an issue that browser becomes.

For me, Android is probably a year away from being production ready. I look to the iPad to see how the video software and hardware works well together, how stability is less of an issue and how quality, stable applications solve more and more requirements.  I’ll be looking to test Android on a smartbook or large format tablet in the next round which we should expect to be readily available in early 2012.