It’s not exactly fair to be comparing the E-series with Cedar Trail like for like as they have vastly different thermal characteristics but there’s an interesting result to be seen in the GPU test results. 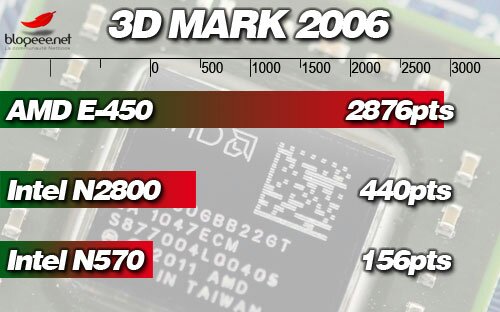 The new PowerVR-based graphics in the Cedar Trail platform are turning in 3x what the N570-based platform does. That’s excellent news.

As far as raw CPU power goes the tests don’t show any comparison but I would expect the dual-core Cedar Trail platform at 1600mhz  to be about the same as the E450. The 1.8Ghz N2800 should turn in better CPU performance.

With the N2800 having a design rating of 6.5w and the E-450 at 18W you can see which one has more chance of appearing in smaller, lighter devices. One wonders if it might be a better choice than Oaktrail for Windows tablets.