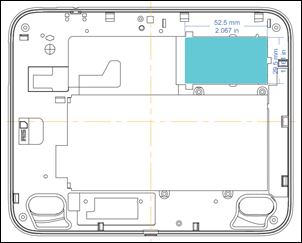 At the end of June, we covered a rumor of a 7-inch TouchPad and now we’ve got information to corroborate that rumor, thanks to the FCC.

CENS.com had released a press release which included this statement:

As the world`s largest PC brand, HP is now in the tablet PC arena after introducing the 9.7-inch Touch Pad, has ordered from a supplier for 400,000 to 450,000 Touch Pad tablet PCs per month, and will sometime in August launch seven-inch tablet PCs. Inventec will supply HP these two tablet PC models.

The key here is the fact that Inventec is pointed to as the supplier of the device. Thanks to the FCC, we can see that the label location diagram bears the Inventec name. This gives more credibility to the statement above, and it is safe to say that the proposed August launch is likely to be accurate.

The 7-inch device that was once codenamed ‘Opal’ has been officially dubbed the TouchPad Go, and will come in 16GB/32GB variants, as well as 3G and 4G. 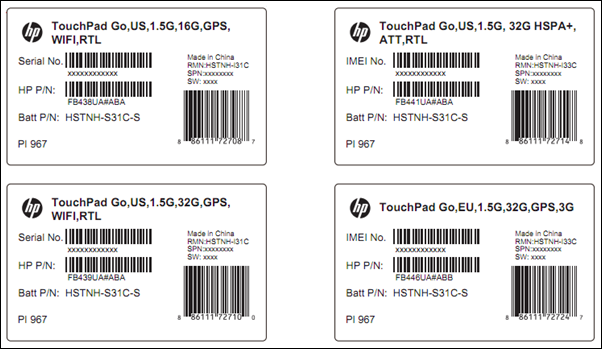 The label diagram indicates that 4G is HSPA+ which rules out Verizon, but there’s also a label that simply specifies ‘3G’ and doesn’t detail whether it’s HSPA or EV-DO, so Verizon and other CDMA carriers may or may not end up with the TouchPad Go. It’s safe to assume that the HSPA+ variant will find its way to AT&T, given that the 4G version of the 10 inch TouchPad already calls AT&T, home.

There’s a high probability that the TouchPad Go 4G will be using the dual-core 1.5GHz Qualcomm Snapdragon MSM8060, just as the TouchPad 4G is, but it isn’t clear whether or not there will be a CPU speed divide like we currently see between the TouchPad and the TouchPad 4G.

The TouchPad (WiFi-only) hit the market with the APQ8060 (a WiFi-only version of the MSM8060). HP clocked the APQ8060 to 1.2GHz for the WiFi-only TouchPad. The TouchPad 4G, which was announced shortly thereafter, uses the MSM8060, but HP decided to clock it to its full 1.5GHz.

I don’t exactly understand HP’s reason for having these two slightly different speeds, but if they feel there’s a need for it, we might see the same pattern come to the TouchPad Go, which would mean a 1.2GHz WiFi-only version while the 4G version would be clocked to 1.5GHz. That, or perhaps HP will just decide to release a software update to clock the WiFi-only TouchPad up to 1.5GHz to match the rest of the devices.

The labels found in the FCC documents list ‘1.5G’ across all variants; it’s likely (but not certain) that this means 1.5Ghz as opposed to ‘generation 1.5’.