Why Don’t We Have Auto-correct on Windows? 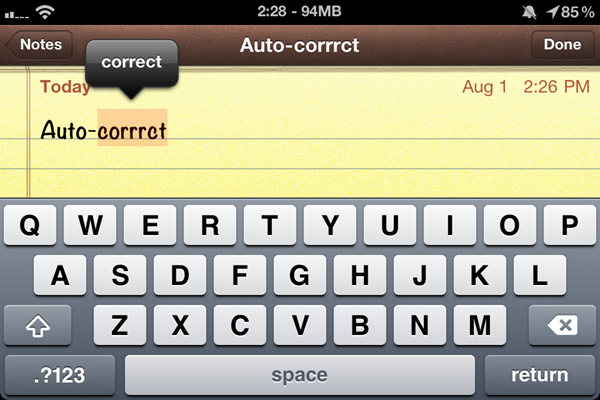 This has been bugging me for a long time: if any Android/WP7/iOS/etc. device out there is smart enough to change “im” to “I’m” or “theres” to “there’s”, why don’t we enjoy the same time- and keystroke-saving measures on Windows? Update: As pointed out in the comments, OSX has had unified spelling correction since Snow Leopard, and has just added iOS-like auto-corrections with Lion. Windows is sorely lacking these features! Does Linux has something similar?

It really amazes me that, in some cases, we’ve got better text input features on low-powered smartphones than we do on ridiculously high-powered Windows machines. The old guys have something to learn from the young’ins.

Sure, a select few Windows programs might give you that squiggly line underneath a word that you’ve spelled wrong, but it isn’t system-wide, doesn’t learn automatically, and is probably rarely updated to add new terms.

The few desktop programs that do make an effort to assist your typing often do an inferior job.

In iOS, if I misspell a word, the phone knows how look at my typing pattern and if its relatively certain that I meant “pants” instead of “psnts” (because A is near S and there’s a high likelihood that I hit the wrong key), then it will automatically make that fix for me. If it isn’t so certain, it’ll give me the squiggly line upon which I can tap to see a few suggestions about what I might have meant. It also highlights the word in question when I tap on it so that if the word is not any of the suggestions, a single press of the delete key will remove the word entirely so that I can try again, rather than having to spam the delete key until I get to the start of the word.

Smartphones also have access to the names of all of our contacts, so they can auto-correct and suggest those, instead of putting a squiggly line under our good friend’s name and trying to tell us that we spelled it wrong, as would happen in your average Windows word processor.

Let’s not forget that smartphones are also better learners. They know how to pick up words that you commonly use even if they aren’t already in their dictionary. Once added, the term is added to the system-wide dictionary. On a Windows program, you’d not only have to manually add a term, but it’s on a per-application basis (that is, if that program supports a custom dictionary).

I have to type the word “resolution” all the time for my writing here on Carrypad and in other places, but it commonly comes out as “resoultion” simply because of the way my fingers sometimes get ahead of themselves. It would be so easy for a computer to realize what I meant and make the fix for me, and yet here I am, having to make the correction manually every time on Windows.

You might say that we don’t need auto-correct when using full desktop keyboards, but I disagree. Though I’ve had a fair share of typing on hardware keyboards, I still occasionally hit a key next to the one that I intended. What’s more, in my daily perusal of the web, I see lots of people who would benefit from such typing assistance — I’m talking about those who don’t seem to know that punctuation exists. And I must ask: why manually insert punctuation and manually add terms to non-universal dictionaries if computers are easily smart enough to do it for us? That’s like manually keeping track of the time instead of using a clock.