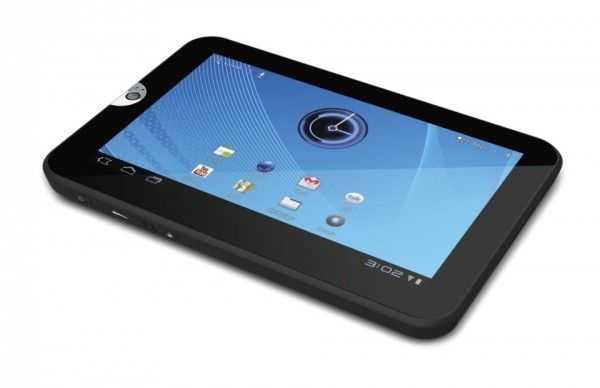 While other 7″ Honeycomb tablets have so far been released with 1024×600 screens, the Thrive 7 has been fitted with a 1280×800 LED backlit display. Honeycomb 3.2 is installed out of the box.

The Thrive 7 uses that familiar Nvidia Tegra 2 platform that most Honeycomb tablets are using today, which means you’ll find a 1GHz dual-core Cortex A9 CPU and 1GB of RAM inside. As for ports, the tablet hides micro-HDMI, mini-USB, and MicroSD away underneath a dust-cover. I thought an error had been made when I heard mention of mini-USB (instead of micro), but we’ve double checked and it is confirmed that the Thrive 7 has a mini-USB port instead of micro-USB. Why Toshiba went with mini-USB instead of micro-USB is unclear. However, you will be able to charge through the mini-USB port, or through the docking connector on the bottom. I think I speak for most of us when I say it would have been awesome to see full-sized HDMI/USB/SD on the Thrive 7, but I suppose they couldn’t cram all of that in the chassis of the 7″ form-factor.

In addition to the aforementioned ports, you’ll find a volume rocker, lock/power button, and rotation-lock switch on the Thrive 7, just like the Thrive 10. There’s also a 2MP front facing camera and a 5MP rear sensor.

At 11mm thick and 399 grams, the Thrive 7 won’t be the thinnest or lightest tablet on the market, but it’s trimmed way down compared to the Thrive 10 which is 16mm thick and weighs in at 725 grams. 16/32GB capacities will be offered. Though the Thrive 7 is focused on mobility, Toshiba says it has no plans at the moment for a 3G version of the unit.

Toshiba will be offering a range of cases for the tablet, including one which will allow the device to be propped up in both landscape and portrait modes. To make use of the docking connector (not found on the Thrive 10), Toshiba is readying a sort of multimedia dock which will play nicely with a Bluetooth keyboard that will also be offered with the device.

Pricing will be revealed closer to launch, which is planned for early December.