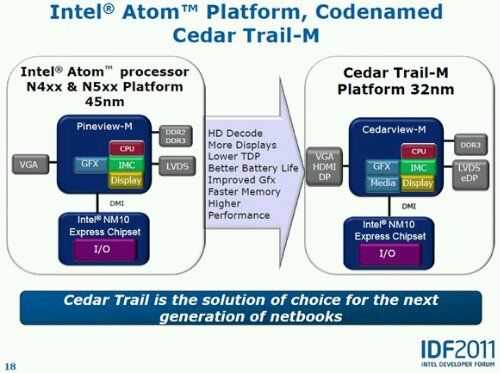 Despite all the fuss about Ultrabooks and Tablets there’s still a significant market for netbooks out there as small, low-cost ‘just enough’ laptops. Developing countries, students, secondary laptops, travel laptops or simply the lowest cost laptop possible, the Netbooks are a valid choice. With the next generation, using Cedar Trail as the CPU cplatform, it gets even better with significant improvements to 3D graphics that should smooth-out quite a few Windows 7 and application experiences. There are improvements in efficiency too that could enable some lighter 10″ tablet formats and thinner netbook designs. Expect Ultrabook-style devices too with SSD’s, sealed designs and of-course, a much lower price than the current Ultrabooks.

But Cedar Trail is delayed. . .again, apparently because the graphics driver certification hasn’t been completed. In the meantime AMD  Fusion netbooks push further into the market.

With Oaktrail-based devices not quite hitting the mark where consumer experience is concerned, [where are those 1.8Hz Oaktrail options?] it’s important that Cedar Trail reaches the market as soon as possible.

Anyone waiting to buy a new Netbook? Would you like to see more Netbook coverage here? We will be at CES in Jan so we’ll get some details of new models, performance and availability then. In the meantime, check the related links below for some more Cedar Trail background.

Posted from the Galaxy Tab at Droidcon NL.