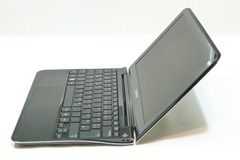 The 900X1B looks great, feels solid, performs well, is surprisingly efficient, light, quiet, has an amazing screen and keyboard and with no moving parts is a real contender for an ultra-portable. Only the power adaptor annoys. At 300gm it’s heavier and bigger than it needs to be. You might find a lighter power pack that would be more useful on a day away from the mains power.

The 900X1B is also available with a Core i5 1.6Ghz CPU and 128GB storage for a more carefree user experience and the prices have come down recently although it remains a premium product.

As usual, the live review was captured on video. Quality isn’t exactly HD but if you’re close to buying a Series 9 or considering a UX21, I really recommend watching. In fact, in my opinion, the 900X1B beats the Asus UX21 and is a good contender in the ultra-portable space.