Firstly, we see a 4.1ah battery. It must be a 4-cell series pack as Chip.de are quoting 58Wh, great sizing for an Ultrabook (although you’d expect it on a 1.8KG heavy device.) Update: It states 4-cell in the report. It looks like the battery is easily replaceable too. Although it’s not a quick swap-out job, it looks like it’s set-up to be done by the owner. 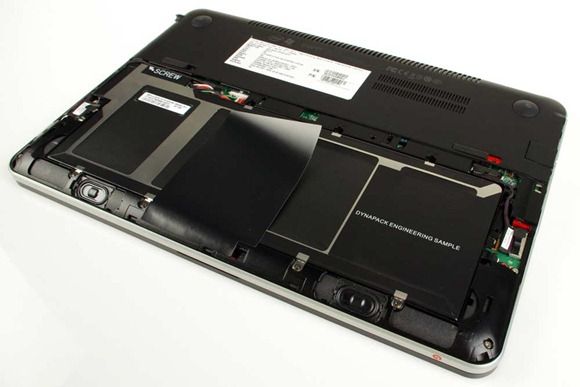 HP are only planning one model of the Envy 14 Spectre in Germany which, in my opinion, isn’t a major disadvantage although there’s an indication that other models will be available if you read HP’s specification page. Core i5 with 128GB storage is a good average though. I don’t see too much advantage with the Core i7 over the i5 given the Turbo gets restricted based on thermals. You might have expected more storage for the price though. Storage is based on the good Samsung 128GB SSD that we’ve seen in the Series 9.

On one side you’ve got a smart looking device with a 1600×900 display, a big battery and a lot of ports. On the other you’ve got one of the heaviest, most-expensive Ultrabooks there is.

Chip.de have a photo-set and video on the article so go check it out.