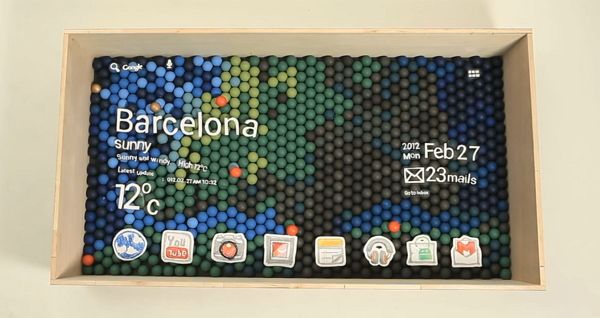 Mobile World Congress, the annual mobile tech trade show held in Barcelona , is fast approaching. All manner of mobile tech companies will be debuting new products, and Asus has been releasing brief teasers of their upcoming announcements. Their latest teaser suggests that Asus may beat Apple to the market with a high-resolution tablet.

Yesterday’s teaser showed three nesting (aka Matryoshka) dolls with the tagline “Divided we stand. Together we rock.” Many are (probably rightly) attributing this to the forthcoming Asus Padfone which is a phone that can dock into a tablet which can dock onto a keyboard to become a smartbook.

Asus’ latest teaser shows pretty clearly the the company intends to offer a tablet with a high resolution (as Apple likes to call it: “Retina”) display on an Android tablet. The teaser shows a box filled with colored spheres (representing pixels), then shows the same setup but with a greater number of spheres that are smaller in size. The tagline is “Eager to see more detail? Twice the detail, twice the fun.” This is an obvious analogy to screen resolution, and if they really are doubling the resolution of their (1280×800) Android tablets, then you’ll be looking at a 2560×1600 resolution tablets in the near future. This would put the PPI at 298.9, beating out the 2048×1536 (261.22 PPI) display that is expected to be included with the iPad 3.

A few weeks ago, a new Asus tablet was spotted which was purportedly the ‘TF300T’, could this be the high resolution tablet that Asus will be showing off at MWC?

Chippy will be at MWC this coming week to cover all of the action, stay tuned for the official announcement from Asus.