Chrome for Android – The Turning Point For Android Tablets 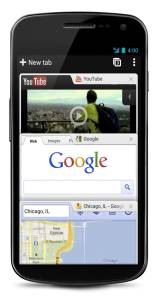 Chrome for Android has just been launched.

Many of you know I run three sites. Carrypad, the tablet-focused site. Ultrabooknews, the thin-and-light laptop site and this one, UMPCPortal.  At UMPCPortal we’ve been focused on productive mobility since 2006 (almost exactly) and as you will probably know, the last few years have been hard on us. Trying to get productivity into a two-handed mobile experience has been completely ignored by mainstream manufacturers. We’ve all tried tablets of course and all been disappointed at the lack or processing power, lightweight apps and of course, the full web experience which requires a full web browser. Mozilla tried with Firefox for Android but didn’t really get there yet. Most people settled on Dolphin HD as the best of the bunch but it wasn’t anywhere near the experience needed for web-based productivity and creation.

Intel offered us some hope with Meego, an optimised Linux-based OS that included a Chromium browser…

MeeGo offers me some hope. A full internet experience and an app store but it’s something needs to mature until at least late 2011 and in fact for it to function fast enough to be productive it will need a high-end dual-core ARM or Intel Moorestown platform that will not be able to provide all-day battery life in a smartphone form-factor. [ref June 2010]

… but we all know what happened there.

And then along came the best smartbook yet. The Asus Transformer Prime has fantastic looking hardware, 18hr battery life (with leyboard dock) and some great sensor, touch and app experiences. The problem was that it also had issues when addressing productive and creative work. The apps are still thin and the browser still terrible.

But there was nothing else to choose from. Until today that is.

Chrome for Android has been launched. It’s in the Android Market for anyone with an Android Ice Cream Sandwich device and it’s fully functional. Well, it seems to be. This Beta software may have a few bugs but it represents the best step yet towards a productive handheld ‘UMPC’ solution. There will still be problems with low-quality, unstable and badly supported native apps,  but Chrome on Android is going to develop fast, encourage a new market for Android tablets and  enable a whole new world of desktop-quality browsing.

There are early issues. Mouseover doesn’t seem to be working well and there could be performance issues related to the (relative to laptops) lack of CPU, memory and general platform speed but these are likely to be fixed very quickly given the effort Google is putting into its browser.

Unfortunately for me, I don’t have an ICS tablet right now. I will be looking for ‘ROM’ upgrade for the Acer A500 I have here as it supports USB host (for keyboards/mice etc) and would work well as a smart, Chrome-based desktop device but that could take a few days before I get round to it. Maybe I’ll be looking for an ASUS Transformer Prime though. Given its smartbook credentials and Chrome for Android it now has the potential to span Carrypad, UMPCPortal and Ultrabooknews!

A quick note on the Android 4.0 requirement. I think it’s a brave bu neccesary move. It means that only ‘Google Android’ gets the best browser and encoruages a big shift to ICS over 2012. it might be annoying for some now but it makes absolute sense to encourage a move away from 2.x and 3.x variants and get everyone moving with ICS. When that happens, ISVs will be far more likely to invest in high-quality tablet application development and that’s where the turning point comes. Following the turning point, the niche designs will jump in too. There’s every chance that we’ll start to see UMPCs again…running Android. I know you’ll be concerned with security, apps, interfaces and such but I feel sure we’ll see those issues solved. The market for alternative designs is going to grow quickly so watch out for a fresh batch of ultra mobile PC news!  It also makes Apple think hard again about a smartbook although my guess is that they have been working on one for a long time already.

Don’t forget that this app is very likely to be in development for X86 devices too. Intel will be putting massive effort into getting this optimised for Medfield-based devices. Comparing Sunspider tests, hopefuly at MWC later this month, will be fun!

I’m interested to hear your thoughts below. I’m sure we’ll have a good discussion.

Noted – There’s no Flash support. I’m not sure too many are going to have a problem with this and it sends an important message out to web developers – Stay clear of Flash!

There seems to be a problem with agent-id. I’m reading that Chrome for Android is identifying itself as a mobile browser.