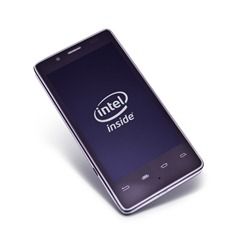 At a Intel press event, still going on as I write, Intel has just announced that Z2580 that we tipped earlier today. It’s a dual-core version of the current Intel smartphone platform which is capable of running Android x86 and other x86 software.

…the Atom™ Z2580 processor that doubles the performance of the Atom processor Z2460, and features an advanced multimode LTE/3G/2G solution. Intel will sample the Z2580 in the second half of the year with customer products scheduled in the first half of 2013.

Addressing the growing handset opportunity in emerging markets where consumers look for more value at lower prices, Intel disclosed plans for the Intel® Atom™ processor Z2000.
The Z2000 is aimed squarely at the value smartphone market segment, which industry sources predict could reach up to 500 million units by 20151. The platform includes a 1.0 GHz Atom CPU offering great graphics and video performance, and the ability to access the Web and play Google Android* games. It also supports the Intel® XMM 6265 3G HSPA+ modem with Dual-SIM 2G/3G, offering flexibility on data/voice calling plans to save on costs. Intel will sample the Z2000 in mid-2012 with customer products scheduled by early 2013.

Also announced was news that Medfield will now be enabled to 2Ghz.

“Extending the leading performance and energy efficiency of the Intel™ Atom® processor Z2460, formerly codenamed “Medfield,” Intel announced that the platform will now support speeds up to 2GHz.”

More details if we get them in the press conference that continues…..