Why don’t all CPUs run at ultra low voltage?  Simply put, running on-die components at low voltages increases the risk of an error or failure.  It takes premium batches of CPUs to reduce the error rate so only the best silicon can be used as a ULV CPU; Which is why it’s expensive!

I’ll talk about ‘Turbo Boost’ and GPU later on but lets give you a few data points that show how much more efficient a ULV CPU is. I haven’t run these figures by any CPU power experts so there’s room for more discussion here but I think we’ve got a good indicator. If not, you’ll see some discussion going on below!

The figures show a normalized power usage figure for two CPUs. One is a LV CPU running at full rate, the other two are ULV CPUs running overclocked by Turbo Boost at two different rates.

Here’s how I did the test.

Intel were nice enough to build in some power measurement sensors into the Sandy Bridge architecture and one of them reports on CPU core power utilization. This is obviously used for the thermal logic that controls Turbo Boost but Intel made the sensors available to all so we’ve got a great way to compare here without worrying about system builds. 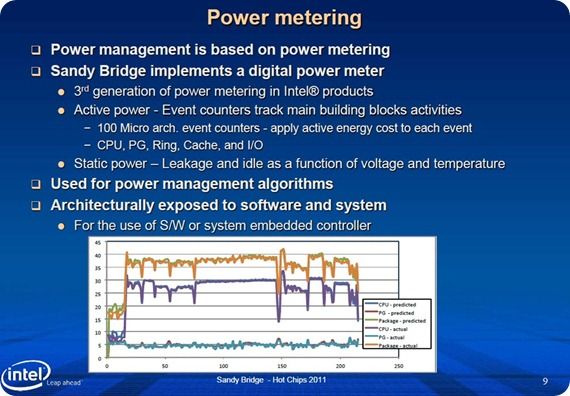 I used these measurements to look at the power used by the Cores. The test program that drove the CPUs was Cinebench 11.5 and the monitoring tool was CPUID Hardware Monitor.

Take a look at this image from a Core i3 2.2Ghz Sandy Bridge platform running at 100% CPU. 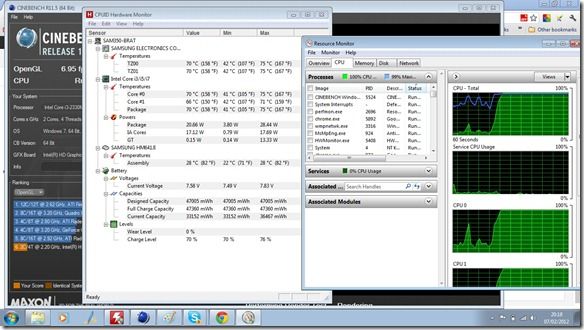 Click to enlarge and you’ll see two important figures. 1) The CPU is at 100% 2) The IA Cores instantaneous power usage is 17.12W

Lets look at the ULV part now. The following was taken from a Core i7 ULV 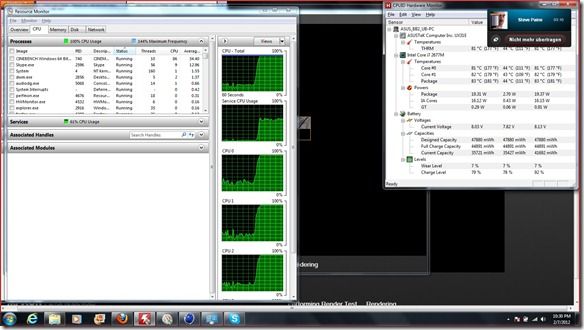 I took another measurement after the CPU dropped down to 127% (2.3Ghz approx.) 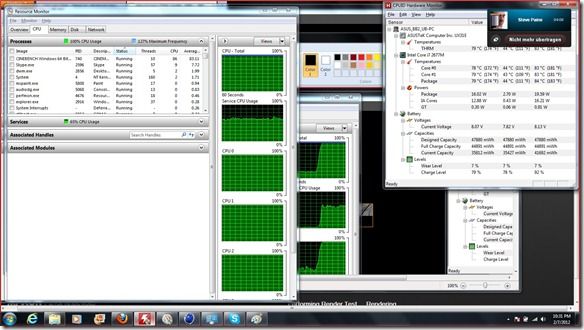 A quick word about system power and Turbo Boost at this stage is probably worthwhile. Average system (not including mains adaptor) power utilization for an Ultrabook running office applications is about 10-12W, less on a clean system. In this scenario, the CPU accounts for around 10-15% of the total power used by the system. You’ve got chipset, GPU, screen backlight, Wi-Fi and many other components to think about as part of the total system power equationwhich means, at these CPU load levels, the difference between low voltage and Ultra Low Voltage CPU is insignificant. It’s only when you start to use the CPU a little more that the differences become noticeable but that doesn’t affect many users. That is reflected in the results seen in part 1. The main advantage of a ULV CPU over a LV CPU are the reduced requirement for cooling and thus, thinner devices, or, devices that run cooler and are able to dynamically overclock for longer. Which brings us on to Turbo Boost.

Turbo Boost is a complex set of measurements and logic that allow a CPU core, or cores, to be overclocked if part of the silicon platform (including GPU) are not being used. Effectively it allows a power limit to be shared across GPU and CPU. If the GPU is not being used, the ‘thermal budget’ can be used to overclock the CPU. Thermal budget is also built up when CPU and GPU are idle allowing them to burst for short times until the cores and die heat up. It’s actually more complex than that but I hope you get the idea. Turbo Boost on ultrabooks using ULV processors is a very valuable tool. It’s why I sent out a note of caution about the AMD Figures the other day. it all hangs on the thermal design and thermal control.

The figures might look a little boring and at normal usage levels, may seem insignificant but at higher loads it translates to significant battery life savings. More importantly, the difference in maximum load figures determines how thin and light a laptop design can be.  As we look forward to Haswell’s better overall efficiency, TDP figures of 13W and improved Turbo Boost, one can imagine how much that’s going to help designs. We could be looking at fan-off designs for the most part too.

Question from a reader: Why don’t high clockrate ultra-low-voltage CPUs exist? I’m assuming that higher clock-rates increase the risk of error and that we’re simply looking at a technology limit. Note that some Ivy Bridge ULV CPUs will Turbo Boost to 3.2Ghz and Haswell will improve things even further in 2013.

Lets talk about this in the comments below and if you know any silicon power experts, invite them to have a look and comment.

Thanks to Cosimo Kroll, Ultrabooknews.de for the help in doing these tests.