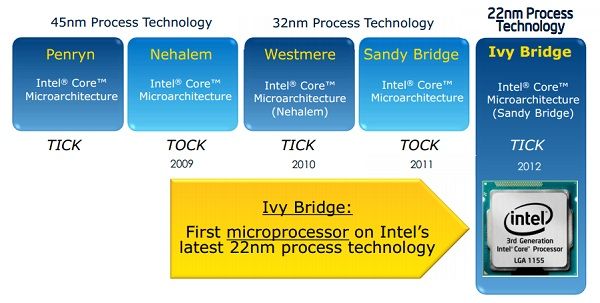 You might be wondering “what’s with all of these bridges?”. Well, Intel uses code names to refer to various classes of processors — lately we’ve been talking a lot about Sandy Bridge and Ivy Bridge, the processors that Ultrabooks are based on. Sandy Bridge was first and Ivy Bridge will soon succeed it. The code names follow the size of the microarchitecture fabrication process (and other features). Smaller fabrication processes allow for more transistors on a single chip, which in turn increases processor performance. Sandy Bridge is a 32nm process while Ivy Bridge is a 22nm process. With Ivy Bridge, Intel is now able to fit 1.4 billion transistors on a 160mm^2 die. 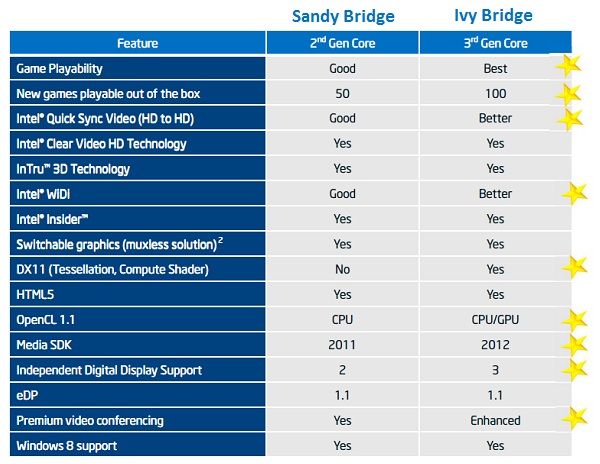 In addition to an increase of up to 20% in processing power, there are several important distinctions between Sandy Bridge and Ivy Bridge. The biggest of which is the integrated graphics. Sandy Bridge comes equipped with Intel’s HD 3000 integrated graphics. HD 3000 is great for casual gaming and also handles HD video playback flawlessly, but you shouldn’t expect to be able to play the latest blockbuster shooters at an acceptable framerate.

Ivy Bridge processors, which come equipped with HD 4000 graphics, could change that. Intel says that HD 4000 is twice as fast as HD 3000, which could mean acceptable levels on complex games (with the right adjustments to the settings, of course). 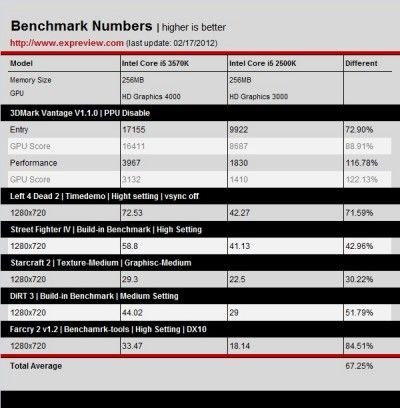 The performance improvements are thanks to a new transistor design:

The performance gains found in the new processors are due in part to the groundbreaking, three-dimensional structure of the new Intel transistors. Until today, computers, servers and other devices have used only two-dimensional planar transistors. Adding a third dimension to transistors allows Intel to increase transistor density and put more capabilities into every square millimeter of these new processors.

Ivy Bridge has a few other advantages over Sandy Bridge such as support for PCIe 3.0, up to three displays, and Intel‘s Quick Sync Video 2.0 which can convert videos up to two times faster than Sandy Bridge processors.

My recommendation at this point, whether you are buying a Sandy Bridge or Ivy Bridge Ultrabook, is to wait!

We’ve already seen the announcement of multiple Ivy Bridge Ultrabooks, including the HP Spectre XT, Sony VAIO T, and Asus Zenbook, among others. None of these have launched just yet, but they are right around the bend. We’re expecting lots of Ultrabook action at Computex starting on June 5th; we’re likely to see the official marketing of Ivy Bridge Ultrabooks immediately after Computex [see our 2012 Ultrabook timeline forecast].

How long should you wait?

Ivy Bridge for Ultrabooks launches, along with a number of products, in the first week of June. The first products will be available in mid-late June but a staggered roll-out is expected all the way through to mid 2013. A few months of Ivy Bridge Ultrabook availability should be sufficient to drop Sandy Bridge Ultrabook prices a significant amount, just don’t wait too long or you’ll be waiting forever! Our Ultrabook 2012 Timeline is here.

If you’re researching an Ultrabook purchase, we have a number of useful resources that you should check out: