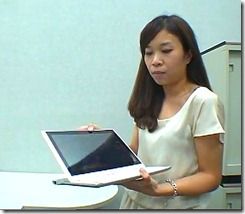 You can find all known information at the MSI S20’s page in our Ultrabook and ultrathin database.