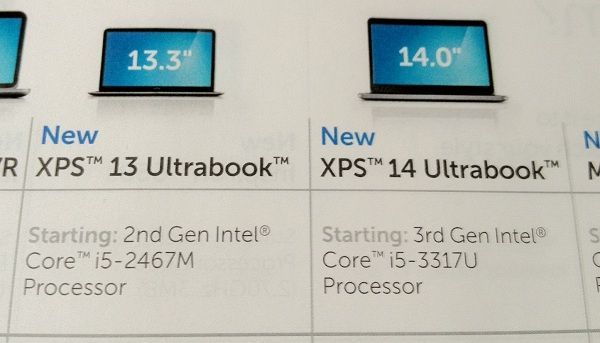 At the beginning of June, Computex revealed to the world a flood of new Ultrabooks based on Intel’s third-generation Ivy Bridge platform. These new Ivy Bridge Ultrabooks, which must meet certain criteria to be called an Ultrabook, represent the second generation of Intel’s Ultrabook specification. Dell’s XPS 13 Ultrabook, while well received, is a first generation Ultrabook based on the previous generation Sandy Bridge platform, but this hasn’t stopped the company from branding it as ‘New’ in online and print advertisements.

The XPS 13 has been available on the market since February 27th, about 4 months from today. This isn’t a terribly long time, and under normal circumstances, I probably wouldn’t have an issue with Dell calling the XPS 13 ‘New’, but given that there are now plenty of second generation Ivy Bridge Ultrabooks available, it does seem a bit disingenuous for Dell to call the XPS 13 ‘New’; especially considering that the company is offering second-gen Ultrabooks based on Ivy Bridge, like the XPS 14, right alongside the ‘New’ XPS 13.

Dell did not immediately respond to a phone request for comment on the matter.

It is surprising that Dell has yet to release an Ivy Bridge refresh of the XPS 13 when many other companies have refreshed their own Ultrabooks with Ivy Bridge, especially given that the XPS 13 has performed well for the company.

While the difference between Sandy Bridge and Ivy Bridge isn’t going to make or break someone’s computing experience, we did want to point out to potential buyers that the XPS 13 is indeed a first-generation Ultrabook and based on Sandy Bridge; if you pull the trigger on the XPS 13 thinking that it really is ‘New’ and based on the latest hardware, you may find it out of date sooner than you’d like. We recently wrote about ‘Why You Should Wait for Ivy Bridge Before Buying an Ultrabook‘.

Beyond the commonalities that make and Ultrabook an Ultrabook, a second generation Ultrabook (like the XPS 14) must be based on Ivy Bridge and feature either Thunderbolt or USB 3.0 connectivity for high-speed data transfer.

We’ve got some great resources for you if you’re looking at buying an Ultrabook , check out our Ultrabook Buyer’s Guide.