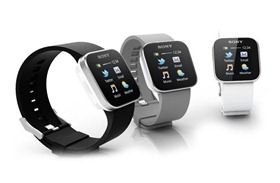 By working to integrate two devices rather than create a generic Bluetooth-connected watch though, Intel might have an advantage and it’s something we’re really excited about. With Smart Connect or AOAC (Always On Always Connected) a smart watch makes complete sense.

Naturally Intel haven’t given much information on the topic and we suspect that this information might even get removed after we post this so here’s what they’ve said in their technical session notes.

Obviously there’s a wireless charging component that might be linked here. We’ve seen that demonstrated before and with a watch needing far less power than a smartphone, it might be a better prospect for wireless charging. Applications are mentioned in the notes too.

Naturally we’ve looked for more information on the product but can’t find any at the moment. Let us know in the comments if you spot anything.

Speculation at this stage is likely to be around BT 4 low power (we’ve seen a Casio  Bluetooth 4 watch using this technology that lasts many months on one charge)  and how a 3G Ultrabook would act as the gateway for a watch that polls for emails and other applications notifications, most likely linked into the Metro notification system.