After a week of media speculation around ‘poor’ Ultrabook sales estimates – that weren’t exactly analyzed in a professional way in my opinion (Analyst Patrick Moorehead takes the same line on Forbes as I did here last week) there’s another point to consider this week after Intel’s Q2 earnings call. Paul Otellini gave us this to think about:

Starting with the 40% figure it seems almost impossible that it could happen. Maybe on one day in December Amazon USA sells laptops that comprise 40% Ultrabooks but that’s something different to what you might expect. I’ve pinned my maximum at 20 million globally for which is around 10% of laptop sales for 2012 and I don’t regard Jan-May as any indication of how the rest of the year will play out. Nov and Dec are likely to see well over 50% of total 2012 sales due to Windows 8, touch and a competitive sales quarter.

On to Ultrabook design numbers, I find this more interesting. 140 is up, again, from early figures that Intel made public and shows serious momentum. It’s important because that number of Ultrabooks means that the top manfucaturers are all working on multiple devices – a sign of confidence. 2nd-tier manufacturers will be in the mix too which means that the lower-cost production lines are ready to move on Ultrabooks – another important sign. 40 touchscreen Ultrabooks will be interesting to track too. We’ve got a number of touchscreen devices in the database already but that’s nothing compared to what could be coming.

Bright Side of News has a good round-up of the second quarter earnings.

ASUS UX32VD in the UK

Following our tips for UK readers wanting to buy the ASUS UX32VD we’ve had feedback from a reader in the UK who says they are happy with the result they’ve had buying an ASUS UX32VD from a Dutch reseller. They’ve got hold of a UK version of the UX32VD for a reasonable price. 4launch.nl still have the ASUS UX32VD in stock right now but we’ve contacted them with a few questions about tax and support and we’ll get back to you in a fresh article if they answer. (We’ve asked for reader discounts and a review model of course!) 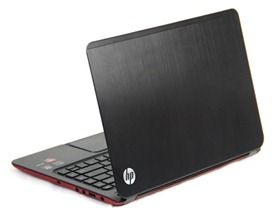 We highlighted the HP Envy 4 Ultrabook as a must-see in our round-up of the Amazon.com  $100 offers this week. (The offer ends on Saturday – see details here) and we’ve just read through a detailed review from HardwareZone.com in Singapore that confirms the Envy 4 Ultrabook is one to look at. Yes, it’s 1366×768 but don’t let the HD screen fans put you off. 1366×768 is not exactly useless. [I use a 1366×768 screen myself – font sizes work perfectly for my eyes, especially when the Ultrabook is in a stand as a desktop, slightly further away than is normal – Chippy]

HardwareZone gives the HP Envy 9/10.  Watch out for an even cheaper non-Ultrabook version of the HP Envy 4 (called the Envy 4 ‘Sleekbook’) that doesn’t have the SSD cache and is based on AMD – that might be a good price, but false economy depending on how the SSD is used. [Does the HP Envy 4 use ExpressCache – Anyone?]

“Great value, unique features, good battery life and a stylish design make the Envy 4 the Envy for everyone.” – HardwareZone

We’ve got all the specs and we’re updating review links in our HP Envy 4 information page.