Three major reviews of the Lenovo Thinkpad X1 Carbon hit the web this week and it was immediately clear that we were looking at something very special. Engadget calls it the ‘definitive Ultrabook for Pros.’ ABCNews (penned by the well known ex-blogger Joanna Stern) said it is “now the Ultrabook to beat.”  We’ve analysed the three reviews and here’s the summary. 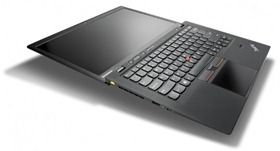 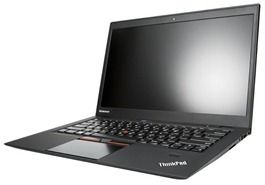 Lets start with the keyboard. Lenovo Thinkpads have a reputation to keep and this back-lit unit won’t disappoint. “If you spend your day typing, this is just the type of keyboard you want to be typing on.” says ABCNews. Others also have positive things to say about the keyboard, and the trackpad.

The screen is a 14” Anti-glare 1600×900 panel with wide viewing angles although this isn’t an IPS panel and it isn’t a full HD panel. Engadget sends a warning out over the brightness saying it’s not good enough for outdoor use. 300 nits brightness is generally not enough for sunlight usage, it’s true.

On battery life we’re seeing the 45Wh battery (not the biggest, but OK for the weight ) return the expected figures. A well engineered Ultrabook drains about 8W on Web work scenarios with 50% screen backlight. ABCNews reports about 5hrs non-stop use. Engadget reports 5hrs of video playback and NotebookReview recorded 6hrs of Web activity with a 75% brightness which matches a 7.5W average – not bad at all for the battery size and screen brightness. Don’t forget though that the X1 Carbon can be re-charged to 80% in 30 minutes. That’s a real advantage.

Disk speeds appear to be excellent.

Lenovo have made the X1 Carbon quiet but with a possible heat trade-off though.

We like the WiFi off switch, reports of good ruggedness, an included Ethernet adaptor, small dimaensions for a 14” Ultrabook, 180 fold-back screen. We don’t like the fact that it only has a Mini Display port for external screen.

There are no major issues we can see here apart from the fact that the X1 Carbon won’t take a Lenovo slice battery. Apart from that, the X1 Carbon really does look like the current benchmark for Ultrabooks.

Reviews: (If you see others, let us know; We’ll add them to the Lenovo X1 Carbon information page.)