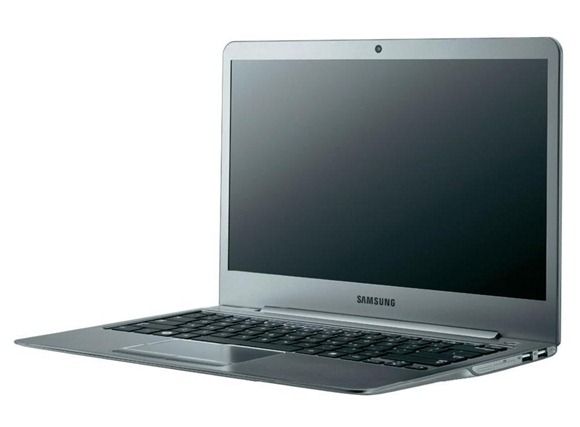 I’ve been looking at a set of reviews for the NP535 for information on where the corners have been cut but before we go into that, lets just highlight that the Samsung Series 5 build quality, port selection, keyboard and screen are all good. We’ve been using an Intel version here for many months now and have been really happy. It’s a good start for the AMD version because it’s built in exactly the same shell. We assume that Samsung have included the same screen too.

It doesn’t take long to find out where the AMD version of the Series 5 differs from the Intel version. There’s no SSD-cache in the 5400RPM hard drive and no Expresscache software that we found to be a real boost on the Intel version. That’s going to affect boot-up, hibernate and application startup times and make a noticeable difference. Samsung have saved probably $20 on a small SSD component – we don’t don’t think that’s worth the trade off .

We question the CPU performance claims of AMD back in Jan and it now looks like the CPU can’t out-perform either an Ivy Bridge or Sandy Bridge version. Cinebench scores are down at 0.87 which is about half what we got when we tested the Sandy Bridge version earlier this year. We’ve seen scores up to 2.4 with Turbo-enabled Ivy Bridge Ultrabooks. CPU performance is disappointing.

As for the GPU, we were expecting it to match or outperform Ivy Bridge. It does. “This frame rate was slightly higher than the average for the last three Ultrabooks we’ve tested.” says PCAdvisor.

As for heat and noise, a good indicator of efficiency, it looks like the AMD version of the Series 5 is warmer than the Intel version. It’s not highlighted in the reviews but there are customer comments about it on Amazon.

Outstanding question marks exist over the video encoding capability. My information points to the AMD CUDA engines being much slower at video encoding than the Intel Quick Sync Video engine, widely regarded as being extremely fast at the job. Obviously Wi-Di is not possible.

The ultrathin, AMD version of the Series 5 looks to be underperforming in a few areas but at 100 €/£/$ less than the Intel version it could come into budgets that don’t stretch to Ultrabooks. The Samsung Series 5 is a well-built laptop with a good keyboard and for the youth market, the balance of CPU/GPU might be OK. CPU enough for office and school work, GPU enough for gaming in the evening. Our big concern is over heat, which shortens lifetime/increases noise, and the lack of SSD cache and Expresscache software which will significantly slow the responsiveness of the system down.

If you’re not into gaming, take a look at Sandy Bridge versions of the Samsung Series 5 which, at least in some countries, are costing only 10% more than the AMD version. You’ll get better CPU performance and all-important SSD.

For hackers: Don’t forget that the Samsung Series 5 laptops have an access port at the back that makes it easy to upgrade RAM and change the 7mm-high 2.5″ HDD.