Andreas Breitschopp of AB-WebLog.com  had one of those software incidents that can really make one frustrated. It wastes time too when an app incompatibility halts progress. Apparently Live Writer and Visual Studio have an issue. (Patch here if you come across this issue too.) With that problem out of the way the language vocabulary trainer AB-Vocitrain, could progress. Andreas talks about the UI this week although I imagine Andreas has also done a lot of functional coding too. Remember that this app is being developed in HTML5 and JavaScript and built in Visual Studio. When I meet Andreas in a few weeks time I’ll be asking him what he thinks are the main advantages and disadvantages of this method. Obviously it’s targeted as one of the easiest ways to develop an application.  Microsoft provides some info here if you’re interesting in this coding methodology.  Full update here. 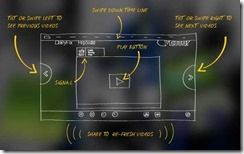 Sagar of Althea runs into a brick wall with automatic light sensors.  He’s developing with HTML and JavaScript is Visual Basic too but it turns out that although there’s a library call for reading the light level from a sensor, there’s no way to adjust the sensor using API calls – it requires native code. Sagar has written to Microsoft and Intel for help on this. Meanwhile, an attempt to use the NFC sensor in a cool way also runs into a dead-end. Watch this space for updates on use of the sensors. The UI design looks good although I would encourage some more left-rights controls for those of us that just can’t be bothered to move from the relaxed ‘consumption’ style of using touch on a laptop to the ‘active’ style of interaction where the arms need to be moved a lot more. Is it possible to have FFWD and REW controls on the left and right panes Sagar? Tilt navigation is also being integrated but I wonder just how useful it is to lift an Ultrabook to navigate. I love the effort on the sensors though. Keep it up team Shufflr! Full update here.

John Berquist of Soma Games gives us some nice tech details this week. In a 4-minute video you learn that they have a little issue developing for Metro because they’re developing in the Unity environment which doesn’t support that yet. They’re pushing to get early access to a Metro-capable build of Unity though so Metro developers should definitely stay tuned here if Unity is their IDE of choice. John also mentions their choice of monetization strategy (Update: It’s called Gree). I’m assuming their app will be free in the store because they’re looking to charge for extras within the game. Metro doesn’t have an in-app monetization platform? Interesting. Finally in the video there’s talk of a double-tap issue but everything else seems to be progressing well. Expect a development build next week!  Full update here.

Shailesh of Clef Software is someone else detailing problems. He’s looking into local storage for his Windows 8 ‘Metro’ app and wanted to progress using SQLite – but he has a problem, it doesn’t work for him. He’s sending a call out via his blog to anyone else that has worked with SQLite and Windows 8 but to avoid being held-up, he’s using an alternative storage method called Local Storage [info.] He’s provided a few coding example for those that are also looking into local app storage. Full update here.

George and Suresh of the Blue Innovations team have once again provided huge amounts of information about their weeks progress. They’ve also opened up a beta program for people interested in the Money Bags app. This app has become a bit more interesting for me this week as have being doing research into some online banking apps for myself. I wonder if MoneyBags could do the job for me? I haven’t tested the beta yet, but I’ll be doing that next week. [The IFA tech trade show is starting here in Europe today and I just took delivery of a Nokia 808 PureView – Some things take priority!] I was interested to read about Intel Smart Connect. It’s a middle ground between always on (AOAC in Windows 8 speak) and fast-resume as while it sleeps it periodically wakes up and connects to the Internet. I‘ve always wanted to see it implemented so reading about iSCT was fasci
nating. I still don’t think it’s right to call it AOAC (which might officially be possible in 2013 with Haswell CPUs) but it’s a great step and I’m glad someone has implemented it into a desktop app. I wonder if this feature is available through Metro apps. More information on touch gestures is provided, information on Intel Rapid Start usage with ‘load on startup,’ more information on design choices and Ultrabook features. Phew! You don’t make a judges life easy do you guys! Full update here.

Lee Bamber of The Game Creators gets deep into code for us this week. He’s using a development tool / extraction layer called App Game Kit [info] which his company developed. There’s a lot of cut, paste and fix going on here and as someone who hasn’t coded in anything other than PHP/HTML for the last ten years, it goes a little above my head! “You also need to add the following string to your C/C++ command options “/FU Platform.winmd /FU Windows.winmd /AI "C:Program Files (x86)Microsoft Visual Studio 11.0VCvcpackages" /AI "$(WindowsSDK_MetadataPath)"”, and the following to your Librarian command options “/force:allowzwobj” says Lee. That’s just what I was about to say, honest. Want to get some serious coding information and watch a timelapse of a 14-hour coding session? His update is here.

So we’re well past the pencil and paper stage now and heading towards a number of Alpha releases for the Ultimate Coder Ultrabook Challenge. Teams have highlighted issues related to sensors and Ultrabook features that I’m sure Intel will take away and work on. My tip for the coders this week, from a judge – not a developer, would be to steal read the list of Ultrabook features from the Blue Innovations team and think about what you could add to your project. As we’re heading towards the half-way point, this is about the only chance the teams will get before the home run.

A note about the developer preview Ultrabook, and touch.

I’ve been using it a lot this week for both laptop and desktop usage and am really starting to enjoy WIndows 8. It will take me weeks, if not months, to get to peak productivity with it’s fun all the way. Many have been asking about the usefulness of touch on an Ultrabook though so I’ve put together a video…which seems to be popular as it’s been viewed nearly 2000 times this week.

Full disclosure – We are being compensated for advertising related to the Ultimate Coder Ultrabook Challenge and to attend an Intel event. We have committed to posting at least once per week on this subject and judging the final applications. All posts are 100% written and edited by Ultrabooknews