I like the look of this slider and am sure that Win8 and touch will bring advantages to users – I’m already a Win 8 touch convert having used it for a month now – but I’m not sure about ‘tablets’ that weigh 1.4K5G, double the weight of any consumer tablet out there. The winner in this space could be the one that reaches 1KG total weight first – a real challenge. Alternatively there are the removable tablet designs or even Atom-based alternatives.

The 12.5” IPS display is a Gorilla-Glass 1366×768 panel. Options up to 256GB SSD and 8GB RAM. Sensors are included: GPS, gyrometer, magnetometer, ambient light sensor, accelerometer, NFC. Total weight: 1.45KG. As for ports, you’ll get two USB3.0 ports, an SD card reader, headset and HDMI. The Wi-Fi is Wi-Di capable, there’s Bluetooth 4.0 and you’ll get twin web cams. Target retail price on this is 1149 Euros – Information we managed to get at IFA earlier this month.

It’s an exciting platform for sure. If apps with sensor-support filter into the Windows 8 Store, this could get even more exciting.

One thing I missed in this video is the NFC feature . Although I have the feature on my ‘secret’ ultrabook here, the U920T will be the first to feature it on a retail model.  We had a demonstration of NFC with Mastercard shortly after doing this video… 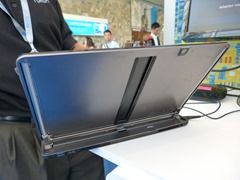 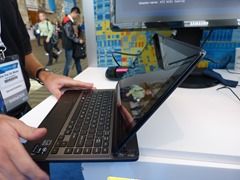 I have a meeting planned with Toshiba within the next 14 days and I’m sure we’ll see more launch info, including confirmation on pricing on this and the other new Toshiba product, the U940/U945, very soon.

In the meantime, check out the previous posts on the Toshiba U925T here.